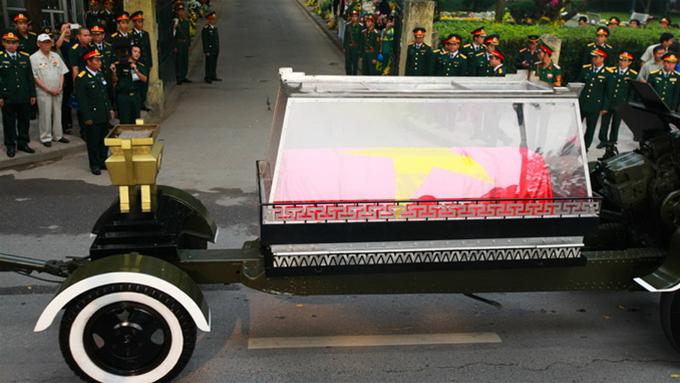 The services held aboard were also joined by local state officials in memory of the late great General who passed away in Hanoi on October 4.

“Bouteflika, in his notes, expressed his deep condolences to the family of the General and the Vietnamese Government and people, saying the deceased has left an unfading imprint in the minds of the Algerian people,” according to the Vietnam News Agency.

A Korean professor, Dr. Lee Keun-yeop, who used to teach education philosophy at Yonsei University in Seoul, also expressed his admire for the late general.

Prof. Lee, 82, former director of the Korea Center for Social Sciences and Humanities on Vietnam and an Eastern Europe and Balkan analyst, have spent many years studying Vietnam and General Giap in particular.

“The General’s image not only in the hearts of not only the Vietnamese but also the Asian people,” VNA quoted him as saying.

“With the examples like President Ho Chi Minh and General Vo Nguyen Giap, I believe that the Vietnamese people will do their utmost to build and defend their beloved nation,” he added.

Mr. Gutierrez described the late General as a modest and open man when recalling his meeting with General Giap in Hanoi 11 years ago.

“We admire him for his wisdom, bravery, military talent and loyalty to the Party, especially his sacrifice to national liberation,” he told VNA.