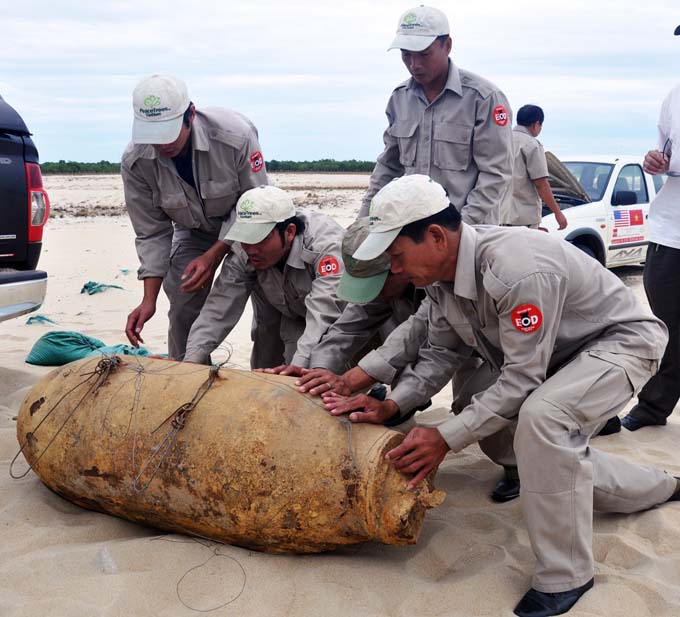 Prime Minister Nguyen Tan Dung has called on international donors, including the U.S., to give further assistance to Vietnam in dealing with consequences caused by unexploded ordnance (UXOs) in the Southeast Asian country.

>> Vietnam needs 300 years to clear UXOs >> Boy loses 4 limbs, 2 others injured by UXO>> Living off UXOs Premier Dung made the appeal at the Development Partnership on Mine Action Conference in Hanoi on Friday. The event was organized by the State Steering Committee on the National Action Program on Settling Consequences of UXOs.   The leader also called for support in mobilizing resources and improving the efficiency of the use of those resources in activities to mitigate such consequences.

Due to many wars, both the land and people of Vietnam have been heavily affected by a large volume of bombs and mines, many of which are still unexploded, the government leader said.   Currently, over 20 percent of the country’s total land area has been contaminated with UXOs. Many accidents related to UXOs have occurred, causing casualties, and affecting the use of land, forest and water resources, and the life of people, PM Dung said. The Vietnamese government has introduce mechanisms and policies to clear UXOs and spent state money dealing with UXO aftermaths. Explosions of bombs, mines, and other weapons have killed more than 42,000 people and injured about 62,000 others in Vietnam since 1975, according to preliminary statistics. On average, UXOs annually kill more than 1,500 people and injure nearly 2,300 others, including many children. After the Vietnam War ended in 1975, the Vietnamese government and the Vietnam People’s Army have taken many measures to cope with UXO aftermaths. The government spends US$80-100 million resolving UXO issues every year and has received support from domestic as well as international organizations.  As a result, tens of thousands of hectares of land have been cleared off UXOs. Vietnam has also drawn maps of UXO-contaminated areas in the country and many UXO clearance projects have been implemented effectively. With a view to continue achieving good performance in UXO clearance, the PM appealed to international donors, ambassadors of other countries and international friends to support the Vietnamese government’s efforts to surmount UXO consequences. He also asked Vietnam’s concerned agencies to work with one another on cooperating with the governments of other countries and international organizations in clearing UXOs and coping with UXO aftermaths. On April 21, 2010, the government issued Decision 504 to approve the 2010-2025 national plan for dealing with bomb and mine aftermaths so as to mobilize domestic resources and international support for UXO clearance.  Vietnam has signed an MoU with the U.S. government, the Geneva International Center for Humanitarian Demining (GICHD) and International Center. It already agreed to a cooperation framework with UNDP, and has been cooperating with other international organizations in relation to UXO clearance. In 2012 and 2013, UXOs have been cleared on nearly 100,000 hectares of land in Vietnam and many projects have been carried out to call for support from donors and to educate the public on the prevention of UXO-related accidents, PM Dung said.  A national bomb and mine action center made its debut at the conference the same day at the conference. Call for U.S. actions On behalf of the Vietnamese government and people, PM Dung called on the U.S. government, with its conscience and responsibility, to make more contributions to the detection and clearance of UXOs and to help mitigate consequences caused by UXOs left over during the war in Vietnam. “Let’s build trust, keep peace, strengthen friendships and cooperation for mutual development, and bring safety and happiness to everyone. We should decisively prevent all wars, all armed conflicts so that all nations and peoples in the world are no longer exposed to heartbroken consequences brought about by UXOs,” PM Dung said. Vietnam’s attempts to settle UXO aftermaths were highly appreciated by Samuel Perez, a Deputy Assistant Secretary of State, Stefano Toscan, director of the GICHD, many foreign ambassadors to Vietnam, and other delegates from international organizations.   They affirmed that their countries and organizations will continue providing assistance to Vietnam in settling UXO issues and in supporting UXO victims in the near future, through a joint statement of donors and non-government organizations. They also hoped to closely cooperate with Vietnam in information exchange, data provision, and experience sharing when it comes to the country’s action plan for coping with bomb and mine aftermaths. They expressed their belief that the newly-established national bomb and mine action center will facilitate their activities to support Vietnam in the UXO-contaminated area in the future.