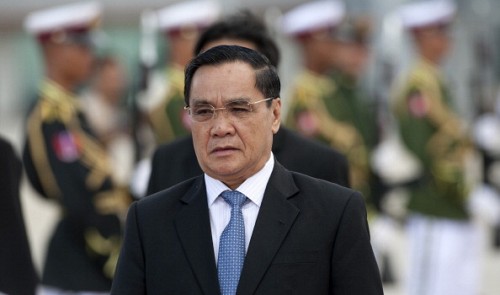 Vietnam’s Prime Minister Nguyen Tan Dung and his visiting Lao counterpart Thongsing Thammavong agreed on measures to boost comprehensive cooperation between the two nations as they met in Hanoi on Friday.

The two leaders also pledged to continue cooperation to implement the agreements reached at the 37th inter-governmental committee on Vietnam-Lao cooperation, and at the two Politburos’ annual meeting, the Vietnam News Agency reported the same day.

The two PMs also agreed to strengthen coordination to boost trade in the second half of this year and bring two-way trade to US$2 billion by the year’s end.

PM Dung suggested that the two countries closely work together against terrorism and sabotage plots, encourage people to join management of shared border lines, and build a border of peace, friendship, stability, cooperation and development.

The host and guest also agreed to push ahead with cooperation on education, agriculture, rural development, sports, culture, information and communication, science-technology, and tourism.

Regarding regional and international issues, the two leaders emphasized the need to maintain peace, security, safety and freedom of navigation and aviation in the East Vietnam Sea for common interest of all nations in the region as well as the world.

They shared the view that all disputes in the East Vietnam Sea must be settled via peaceful means based on international law and regional agreements.

PM Dung said Vietnam will make every effort to support Laos to successfully play the role as Chair of the ASEAN in 2016.

Vietnam will also assist Laos in developing hydropower in the Mekong River for social-economic development, he added.

However, the Vietnamese government chief said Vietnam hope that Laos will share the country’s concerns that over 20 million Vietnamese people in the Mekong Delta depends on the water resources from the river for their livelihoods.

Regarding the hydropower issue, PM Thongsing Thammavong said the two countries needs to continue discussions about it and listen to the outcomes of the joint research on the impact on hydropower projects in the Mekong River, which will be available in December this year.

The Lao PM emphasized that Lao should not build hydropower dams on the Mekong River’s mainstream if such construction has great impacts on the environment and people’s life.