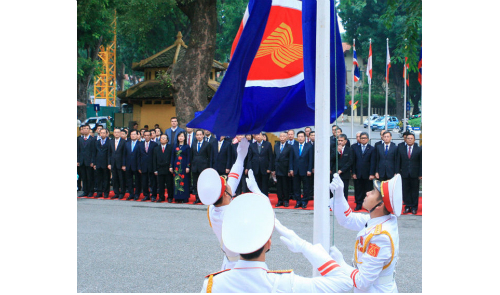 Vietnam on Thursday held flag-raising ceremonies in its two biggest cities of Hanoi and Ho Chi Minh City to mark a historic event for the country and nine others in the Southeast Asian region.

The ceremonies to celebrate the official establishment of the ASEAN Community were organized at the headquarters of the Ministry of Foreign Affairs in Hanoi and at Bach Dang Wharf in District 1, Ho Chi Minh City.

Speaking at the ceremony in the capital city, the ministry’s officials and attended by ambassadors and representatives of ASEAN countries in Vietnam, Pham Binh Minh, Deputy Prime Minister and Minister of Foreign Affairs, said it was a moment of historic significance to all ASEAN member countries.

The formation of the ASEAN Community is the result of regional nations striving for nearly half a century, the Vietnamese minister said.

Effort exerted for the sake of peace, friendship, cooperation and development for all the peoples in Southeast Asia is the decisive factor leading to the success of ASEAN today, Minister Minh said.

The launch of the ASEAN Community will take cooperative relations to a new height, which will ensure the legitimate interests of the member states and assert the central role of the grouping following a rising trend in increased cooperation in the region, he added.

According to Deputy Prime Minister Minh, there will be many challenges on the path ahead as well as much work to do for the ASEAN Community.

But he is confident that the ASEAN Community will move forward steadily, completing all of its objectives in building a peaceful, stable, self-reliant, and intensively integrated community which can effectively cope with challenges and be a constructive player in the global arena.

In Ho Chi Minh City, a flag-hoisting ceremony to welcome the establishment of the ASEAN Community was formally organized at Bach Dang Wharf, District 1.

Vietnamese soldiers wait for orders to hoist the ASEAN flag during a ceremony at Bach Dang Wharf, District 1, Ho Chi Minh City on December 31, 2015 to mark the establishment of the ASEAN Community. Photo: Tuoi Tre