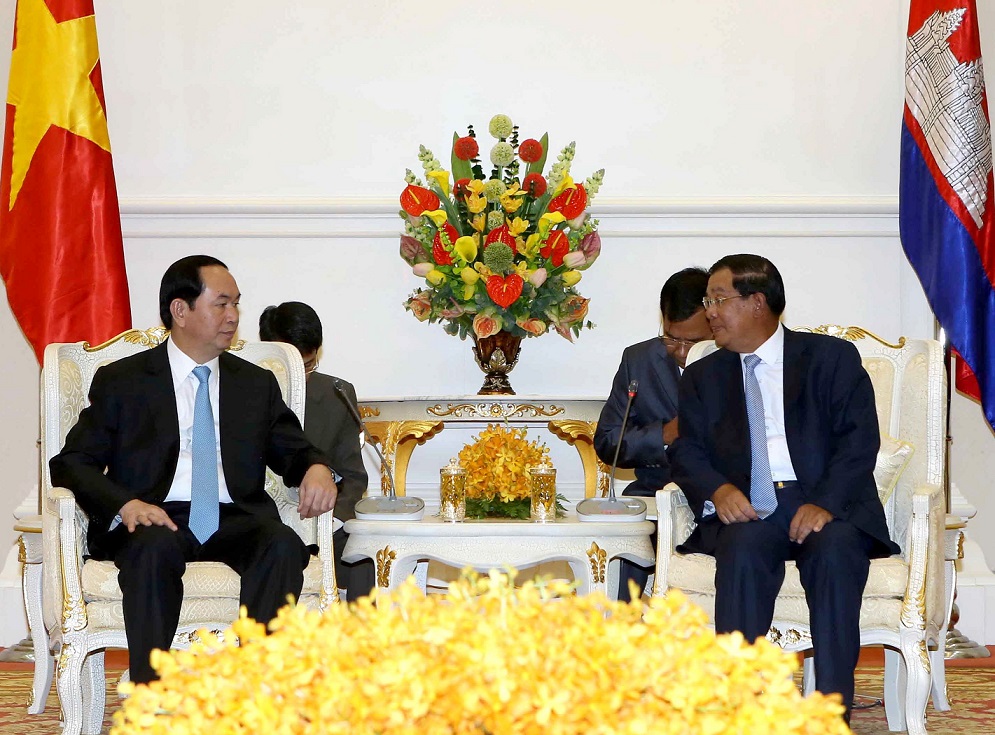 Vietnamese State President Tran Dai Quang met with several Cambodian leaders on Wednesday as part of his state visit to the country to discuss measures to expand comprehensive cooperation and the friendly relationship between the two nations.

President Quang officially began his trip to Cambodia, scheduled for June 14 to 16, with a welcome ceremony organized in Phnom Penh, the Vietnam News Agency reported.

The head of state then joined talks with King Norodom Sihamoni, stating that his visit was symbolic of Vietnam’s respect and desire for the enhancement of its friendly relationship and comprehensive cooperation with Cambodia, for the sake of the two peoples’ interests in peace, stability, and national development.

The two leaders reached consensus on the tight coordination of informational exchanges, border management, joint sea patrols, and the protection of national sovereignty and social security.

The Vietnamese state president convened meetings with Say Chuum, president of the Cambodian Senate, and Heng Samrin, chairman of the country’s National Assembly, on the afternoon of the same day.

The Vietnamese Party, state, and people have always respected and focused on fostering the friendship, unity, and multi-faceted cooperation between the two countries, President Quang was quoted by the Vietnam News Agency as saying during the talks.

Regarding the friendly relationship and the tradition of mutual support between Hanoi and Pnom Penh, the two Cambodian leaders asserted that their people would not forget the assistance of Vietnamese soldiers in previous wars.

Such support helped contribute to Cambodia’s present national development and its value should be passed on to future generations, they stated.

Amid the complicated progression of regional and international issues, it is necessary for the two sides to cement their ties, respecting the accomplishments of their ancestors and the hopes of the two peoples, Quang remarked.

Striving for US$5 billion trade turnover

The Vietnamese head of state also sat down for a talk with Cambodian Prime Minister Hun Sen, during which the two expressed their satisfaction with the positive development of Vietnam-Cambodia cooperation.

They vowed to comply with all the agreements signed by the two nations' leaders and continue their contributions to the preservation of peace, stability, and development in the region and the world.

New policies, including tax reduction and economic collaboration in border areas, will also be considered in order to elevate the two countries’ bilateral trade turnover to $5 billion in the near future.

President Quang extended his appreciation toward his host for supporting the Vietnamese community in Cambodia and hoped that similar assistance would be continued in order to improve general living conditions for the people.

Addressing regional and global issues, the two parties agreed to carry on with their mutual support at multi-lateral forums and the settlement of disputes, as well as the management of water resources from the Mekong River.

On the evening of the same day, King Sihamoni hosted a state banquet in honor of the president, the First Lady, and the delegation of high-ranking Vietnamese officials, according to the Vietnam News Agency.