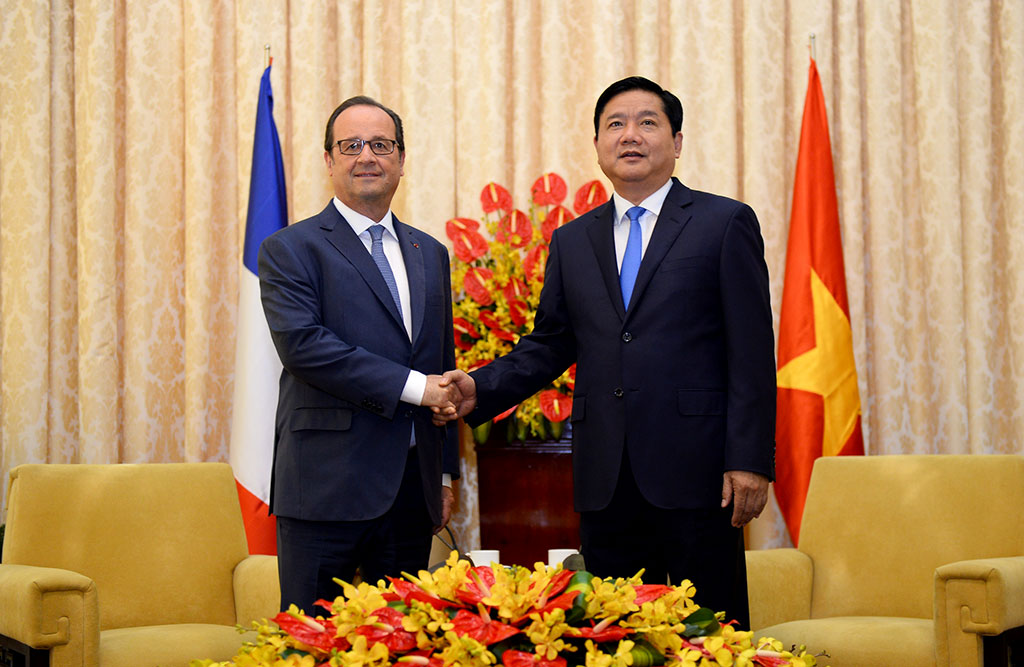 Ho Chi Minh City is an active and hospitable place, France’s President François Hollande assessed during his stay in the southern hub as part of his official visit to Vietnam from September 6 to 7.

President Hollande sat down for a talk with municipal Party chief Dinh La Thang at the Reunification Palace on Wednesday afternoon where he noted how impressed he was with the rapid development of Vietnam and Ho Chi Minh City’s contribution to that development.

The dynamism of the city and the hospitality of its people continue to leave a memorable imprint in the minds of French citizens who visit the metropolis, he continued.

Speaking to his guest, Secretary Thang praised the increasingly positive and practical achievements of the France-Vietnam strategic partnership since its establishment in September 2013.

Economic cooperation is the top priority in the two nations’ bilateral relationship, the Vietnamese official said, adding that Ho Chi Minh City will continue to provide favorable conditions for French businesses to operate in finance and banking, trade, transportation, post and communications, education, and healthcare.

He extended his gratitude toward France for its assistance in the development of Ho Chi Minh City and Vietnam, hoping that the European country will continue providing official development assistance (ODA) to the Southeast Asian country’s infrastructure improvement and environmental protection.

In response to President Hollande’s wish for spreading French education, Thang considered language as a bridge to help the two peoples connect.

He also held a brief meeting with Vietnamese doctors who had been trained in France and several France-Vietnam healthcare organizations.

The French president bid farewell to Ho Chi Minh City at Tan Son Nhat International Airport in the evening, wrapping up his trip to Vietnam.