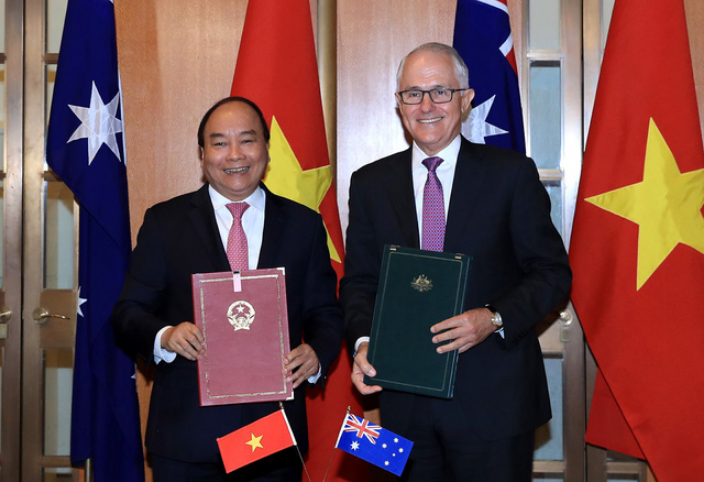 Vietnam and Australia have agreed to elevate their bilateral relationship to a strategic partnership, opening a new stage of development for the two nations’ ties.

Vietnamese Prime Minister Nguyen Xuan Phuc and his Australian counterpart Malcolm Turnbull signed a joint statement on the establishment of the strategic partnership following their talks in Canberra on Thursday.

The historic event was part of PM Phuc’s official visit to Australia from March 14 to 18.

It also fell on the occasion of the 45th anniversary of the Vietnam-Australia diplomatic relations.

During their conversation, the two premiers expressed pleasure at the growth of bilateral trade in recent years with nearly US$6.5 billion in 2017, up seven percent compared to the previous year.

Both sides agreed to create maximum conditions for the intensive and comprehensive development of bilateral economic ties, and to increase economic interests in their bilateral relations.

The two leaders expressed their delight at the increasing number of Vietnamese students in Australia.

There are nearly 30,000 Vietnamese students in Australia, who have contributed to improving the quality of human resources and developing Vietnam’s socio-economic development.

PM Turnbull appreciated Vietnam’s role in pushing the signing of the Comprehensive and Progressive Agreement for Trans-Pacific Partnership (CPTPP).

Following the withdrawal of the United States from the Trans-Pacific Partnership (TTP) free trade agreement in January 2017, the remaining 11 member nations agreed to negotiate a new deal and renamed it the CPTPP in November of the same year.

PM Turnbull urged the two sides to closely coordinate in the ratification and implementation of the pact, expressing his belief that the agreement would benefit its member countries.

The heads of government stressed the need to expand investment in each other’s strong fields.

PM Phuc asked Australia to encourage its businesses to invest in Vietnam in the fields of energy, infrastructure, telecommunications, knowledge-based economy, and science and technology.

Following their talks, the premiers witnessed the signing of four cooperative documents in education, science and technology, agriculture, forestry, and aquaculture.

PM Phuc left Canberra for Sydney on Friday morning to attend the ASEAN- Australia Special Summit, which takes place on March 17 and 18.