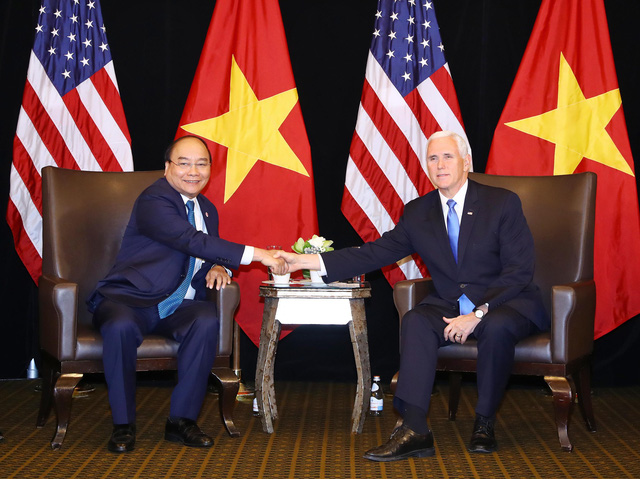 The conversation was conducted on the sidelines of the 33rd Association of Southeast Asian Nations (ASEAN) Summit and related meetings in the city-state, according to the Vietnam News Agency.

PM Phuc said Vietnam wants to lift the bilateral comprehensive partnership with the U.S. to new heights on the basis of mutual respect for independence, sovereignty, and each side’s political institutions.

He proposed that the two countries further facilitate their bilateral ties in trade and investment for the benefits of both peoples.

Vietnam welcomes the U.S.’s support for ASEAN’s stance on the East Vietnam Sea issue, as well as negotiations on a Code of Conduct (COC) for the maritime area in accordance with international law, including the 1982 United Nations Convention on the Law of the Sea (UNCLOS), Phuc continued.

Vice-President Pence stressed that the U.S. supports a strong, independent, and prosperous Vietnam, and is willing to cooperate with the Southeast Asian country in multiple fields.

He agreed to increase the exchange of high-level delegations in the coming time, especially on the occasion of the 25th anniversary of diplomatic relationship.

The leader highlighted common interests in maintaining peace, stability, security, safety and freedom of navigation and aviation in the Indian and Pacific Oceans.