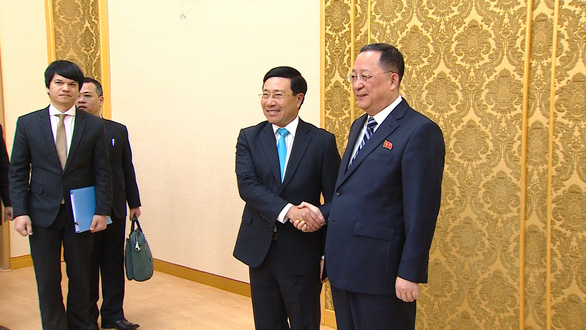 Vietnamese Minister of Foreign Affairs Pham Binh Minh and his North Korean counterpart Ri Yong-ho have consented to enhance their countries’ relationship, as part of the former’s business trip to North Korea.

Minister Minh, who is also Vietnam’s deputy prime minister, and a delegation of high-ranking officials joined talks with Minister Ri in Pyongyang on Wednesday, within the framework of his official visit from February 12 to 14.

During the meeting, the Vietnamese foreign minister affirmed that Hanoi is willing to promote bilateral cooperation in the areas that match the potential and interests of each side, as well as national and international regulations, for peace and development in the region and the world.

The Southeast Asian country is ready to share its experience in national construction, socio-economic development and international integration, he continued.

Vietnam will consistently support dialogues aimed at maintaining peace, security and stability on the Korean Peninsula, and actively contribute to the efforts, Minh added.

Replying to his guest, Minister Ri stressed his intention to further foster bilateral ties, as the two nations will mark their 70th anniversary of diplomatic relationship in 2020.

He agreed on exchanging measures to enhance the bilateral relationship commensurate with the new situation.

The official also took the occasion to thank Vietnam for its contribution to the dialogue process for peace, security, cooperation and development on the Korean Peninsula.

Both sides consented to continue coordination at international and regional forums, namely the United Nations, Non-Aligned Movement, ASEAN Regional Forum, as well as international conferences and forums among political parties.

On the same day, Minister Minh also held a meeting with Ri Su Yong, vice-chairman of the Central Committee of the Workers’ Party, during which he stressed that the Vietnamese Party and government want to cement traditional friendship with their North Korean counterparts.

The Workers’ Party and government treasure the relationship between both countries, considering it a valuable asset that needs to be preserved and upheld, said Vice-chairman Ri.

He expressed his belief that Minh’s ongoing visit will make important contributions to reinforcing and promoting the Vietnam-North Korea traditional friendship and partnership.