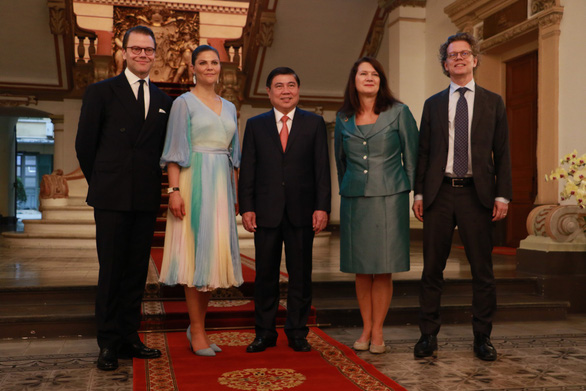 Crown Princess of Sweden Victoria Ingrid Alice Desiree had a busy agenda in Ho Chi Minh City on Wednesday, as part of her three-day official visit to Vietnam.

Crown Princess Victoria, her spouse, and a delegation of high-ranking Swedish officials arrived in the southern Vietnamese metropolis that morning to begin the last day of her Vietnam visit, which ran from May 6 to 8.

The crown princess spent more than an hour touring the Saigon River, meant as an excursion to highlight issues relating to the city’s drainage system.  Several of the city’s iconic architectural structures were also pointed out during the tour.

Her agenda also included a visit to Fram, a Swedish-Vietnamese Venture Building & IT-development company in District 1, on the afternoon of the same day.

During the event, Christopher Brinkeborn Beselin, Fram’s CEO, shared with the crown princess about the development opportunities of technology in the Vietnamese market, as well as his journey to establish a start-up company here.

According to Swedish Minister of Foreign Trade Ann Linde, who accompanied the crown princess, engineering and technology are extremely essential to Sweden’s development.

Ho Chi Minh City has always cherished its relationship with Sweden, one of the first European nations to establish diplomatic ties with Vietnam, chairman Phong said at the meeting.

The two countries will mark the 50th anniversary of their diplomatic relationship this year.

Sweden currently has 32 investment projects worth nearly US$300 million in Ho Chi Minh City, ranking 14 out of 106 countries and territories that are currently invested in the metropolis, the chairman continued.

Following the talk, Crown Princess Victoria got on a flight and return to Sweden at 9:00 pm the same day, concluding her three-day official visit to Vietnam.