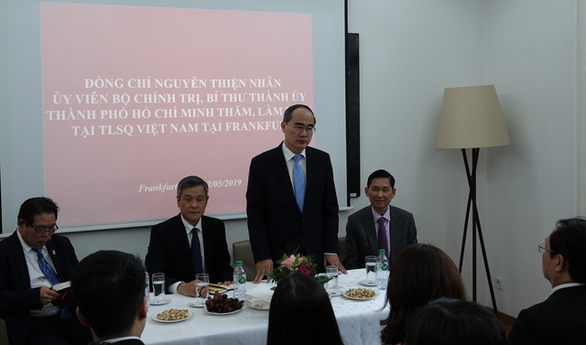 Ho Chi Minh City Party chief Nguyen Thien Nhan is currently in Germany on a trip meant to offer insight into partnership opportunities and expand cooperation between the two sides.

The visit is part of Nhan’s business trip to Europe scheduled for May 19 to 26.

Nhan, secretary of the municipal Party Committee, commenced his trip with a visit to the Embassy of Vietnam in Germany shortly after landing in Frankfurt on Wednesday afternoon (local time).

The trip is meant to seek out ways to bolster cooperation between Ho Chi Minh City and the European country in such fields as the digital economy, vocational training, and the building of smart urban and financial centers, Nhan said during a meeting at the embassy.

According to Vietnamese Ambassador to Germany Nguyen Minh Vu, the trip serves as a significant opportunity for the southern metropolis to learn from Germany.

The strategic partnership between the two nations has also deepened, creating more cooperative opportunities for Vietnam, and Ho Chi Minh City in particular.

On Wednesday evening, Secretary Nhan and his delegates met with Boris Rhein, chairman of the Hessen State’s parliament, and attended the 70th anniversary of Germany’s constitution.

Nhan previously paid a working visit to the Netherlands from May 19 to 22 to learn about the country’s approach to flood control and smart city development.