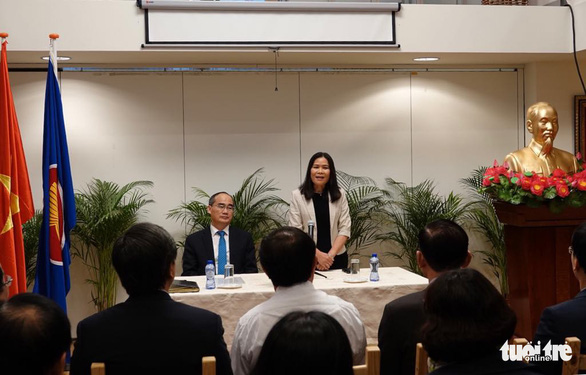 A high-level Ho Chi Minh City delegation led by municipal Party chief Nguyen Thien Nhan is on a working visit to the Netherlands to gain experience in flood control and smart city development.

The officials landed in Amsterdam on Sunday afternoon local time and began their visit with a trip to a Heineken factory in the capital city.

Nhan praised the brewer’s profitable operations in Vietnam and their focus on environmental protection in production.

Later the same day, the Vietnamese delegation paid a visit to the Embassy of Vietnam in The Hague, where Nhan said Ho Chi Minh City attaches great importance to its officials’ visit to the Netherlands.

Experience and cooperation opportunities in areas including smart city development, artificial intelligence and flood control are key points of focus of this visit, Nhan said.

The Netherlands has solutions for managing its water resources and dealing with flooding vulnerability, which Ho Chi Minh City needs if it was to become a sustainable metropolis, the Vietnamese leader stressed.

“After each trip, we must be able to answer questions we had raised beforehand on how to advance the growth of our city and our nation,” the municipal Party leader told embassy personnel.

The delegation is scheduled to make another stop in the Dutch city of Eindhoven before departing for Germany.

The Ho Chi Minh City officials will conclude their Europe trip on May 26.

Ho Chi Minh City had sunk by half a meter over the past 25 years, Dutch expert Gilles Erkens pointed out last year.

Over 60 percent of the southern hub has an elevation of under 1.6 meters, while the highest tide was recorded at 1.72 meters in December 2017. The situation is most evident around the flyover on Nguyen Huu Canh Street in Binh Thanh District, which usually becomes flooded whenever it rains.

During a 2018 conference, a Ho Chi Minh City geomatrics official assessed that multiple areas in Binh Chanh District, Binh Tan District, Nha Be District, Thu Duc District, District 7, District 8, and District 12 had been sinking by five to 10 millimeters every year.

Meanwhile, climate change has caused sea level to rise by about three millimeters a year, the official continued.