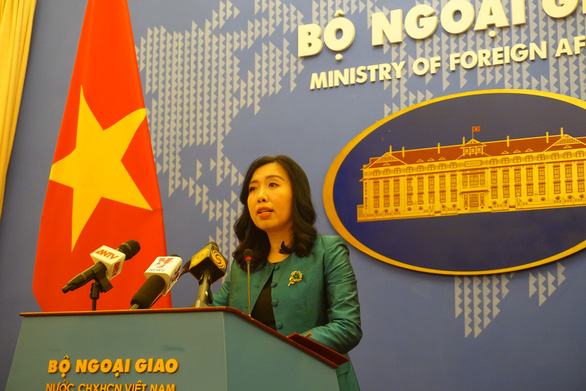 “Vietnam requests that all sides’ activity in the East Vietnam Sea respect sovereignty, international law, and the 1982 United Nations Convention on the Law of the Sea,” Le Thi Thu Hang, spokeswoman of the Ministry of Foreign Affairs, said on Thursday afternoon at a regular media meeting in Hanoi.

In late June-early July, China staged a major war game lasting for a week to the north of Vietnam’s Truong Sa (Spratly) archipelago in the East Vietnam Sea.

On July 2, the U.S. Department of Defense said that China had launched anti-ship ballistic missiles from man-made structures near Truong Sa.

“Of course the Pentagon was aware of the Chinese missile launch from the man-made structures in the [East Vietnam Sea] near the Spratly Islands,” CNBC quoted Pentagon spokesman Lt. Col. Dave Eastburn as saying in an emailed statement in response to their inquiry about the tests.

“What’s truly disturbing about this act is that it’s in direct contradiction to President Xi’s statement in the Rose Garden in 2015 when he pledged to the U.S., the Asia-Pacific region, and the world, that he would not militarize those man-made outposts.”

At the Hanoi press briefing, Hang asserted that Vietnam “is deeply concerned about this issue.”

China claims almost all of the East Vietnam Sea, a busy waterway which is believed to sit on rich oil resources.

Vietnam and some other Southeast Asian countries have consistently opposed this absurd claim.

In 2016, the Philippines won an international arbitration case against China regarding their disputes in the waterway.

Beijing refuses to recognize this ruling.