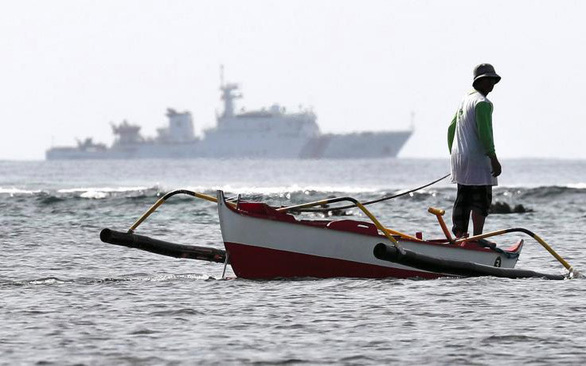 Initiating confrontations, creating and escalating tension, yet never allowing the situation to get out of control or develop into serious conflict are the ways China has been behaving in the East Vietnam Sea toward its regional neighbors, including Vietnam.

“A country often employs the ‘gray zone’ strategy to gain a certain advantage, usually in territorial claims, without the use of direct force on a large scale,” said Nguyen The Phuong, a researcher at the Center for International Studies (SCIS) of the Vietnam National University-Ho Chi Minh City.

“This strategy has two fundamental characteristics: prevention of conflict from crossing a threshold that could trigger a hot war and gradual advancement,” Phuong said.

“Sovereignty is a long-term issue.

"For China, the longer they wait, the more there is to gain.

China has repeatedly tested and made adjustments to its ‘gray zone’ strategy through stand-offs with other nations’ law enforcement forces, most notably in the East Vietnam Sea, since 2006.

These harassments are aimed at altering the status quo, turning undisputed waters into disputed waters, and complicating responses from other parties.

China’s 'maritime militia' is not a secret.

“It is outfitted with several dozen large new ships that resemble fishing trawlers but are actually purpose-built for 'gray zone' operations,” Martinson said in a March 2019 interview published on The Maritime Executive.

The presence of a “worrying” number of Chinese vessels near East Vietnam Sea entities illegally occupied by Beijing was highlighted in a January 2019 report by Gregory Poling, director of the Asia Maritime Transparency Initiative (AMTI) by the Center for Strategic and International Studies (CSIS).

These boats average more than 450 metric tons, well over the size legally required for boats undertaking international voyages to use Automatic Identification System (AIS) transceivers, which broadcast identifying information, headings, and other data about oceangoing vessels.

However, fewer than five percent of them actually broadcast AIS signals at any given time, Poling wrote for Foreign Policy in an article published on June 25.

“This suggests a fleet intent on hiding its numbers and actions,” Poling wrote.

China has shrugged off its provocations in the East Vietnam Sea as maritime incidents between fishing vessels, all while keeping its maritime militia hidden behind a civilian facade to continue harassing foreign vessels operating inside the illegal 'nine-dash line' that Beijing claims gives it economic rights over more than 80 percent of the waterway.

Nguyen The Phuong said he expects to see China persists with its 'gray zone' operations in the future due to four primary reasons.

First, Beijing has time to spare and can gradually advance its sovereignty claims for the next 50 years or more.

Second, China has the resources to optimally implement elements of “gray zone” operations.

Lastly, major world powers such as China are playing by their own rules by ignoring international laws, especially maritime laws such as the 1982 United Nations Convention on the Law of the Sea (UNCLOS).

In a teleconference organized by the U.S. Department of State’s Asia Pacific Media Hub on Tuesday, Commandant of the U.S. Coast Guard Adm. Karl Schultz said he looked forward to working with the United States’ Pacific partners to ensure a “free and open Indo-Pacific where individual sovereignty is protected."

“We are absolutely in support of free and open sea lines of communication in international waters,” Schultz said in response to a question posed by Tuoi Tre (Youth) newspaper regarding the U.S. strategy to counter China in the East Vietnam Sea.

The Coast Guard’s active participation in the region is important to signal to regional actors that the U.S. is “serious” and “committed” to “free and open, rule-based values and behaviors in the Indo-Pacific,” the admiral told Tuoi Tre.

Schultz said the Indo-Pacific region, including the East Vietnam Sea, is “critically important” to U.S. and international interests.

He added that the U.S. Coast Guard has recently deployed vessels to support regional operations at the request of the U.S. Indo-Pacific Command.

Responding to questions from the Philippines’ ABS-CBN Broadcasting concerning Beijing’s “physical assertion of its presence” in the East Vietnam Sea, Schultz said there needs to be “international push-back” to China’s actions.

“[We must] say, you know, we reject the types of behaviors, the antagonistic, aggressive behaviors that are not consistent with the rule-based order,” Schultz said.

The admiral added the U.S. is collaborating and working diligently with nations in the region including Vietnam, the Philippines, Malaysia. and Indonesia.

The U.S. has transferred some former high-endurance cutters, the 378-foot Hamilton-class cutters, to the Philippines and Vietnam.

“Those are capabilities that the host nations should be able to develop and use to protect their own sovereign interests in the region,” he said.

The Chinese survey ship Haiyang Dizhi 8 and its escorts have, since July 3, blatantly disrupted and interfered with Vietnam’s economic activities through illegal moves in the waters inside Vietnam’s Exclusive Economic Zone (EEZ) and Continental Shelf near the Tu Chinh – Vung May (Vanguard Bank – Rifleman Bank) region.

Hang said again at a press conference on Thursday that Vietnam “resolvedly and consistently safeguards its sovereignty, sovereign rights and jurisdiction in the East [Vietnam] Sea as defined in the 1982 United Nations Convention on the Law of the Sea [UNCLOS] through peaceful means based on international law."

Both Vietnam and China are members of the 1982 UNCLOS, which defines the rights and responsibilities of nations with respect to their use of the world's oceans.

Vietnam has contacted the Chinese side many times via different channels, handed over diplomatic notes to protest China’s violations, and demanded China immediately withdraw all vessels from Vietnam’s EEZ, Hang told reporters in Hanoi.

Vietnamese armed forces have carried out proper measures, she said, adding that maintaining peace and stability as well as ensuring freedom of aviation and navigation, obeying the law and respecting sovereignty, sovereign rights and jurisdiction of nations as stipulated in the 1982 UNCLOS are the common interests and responsibilities of countries and the international community.

“Vietnam welcomes and stands ready to join efforts with countries and the international community to realize the above-said target for peace, stability, cooperation and development of all nations in the region and the world,” the spokesperson stressed.