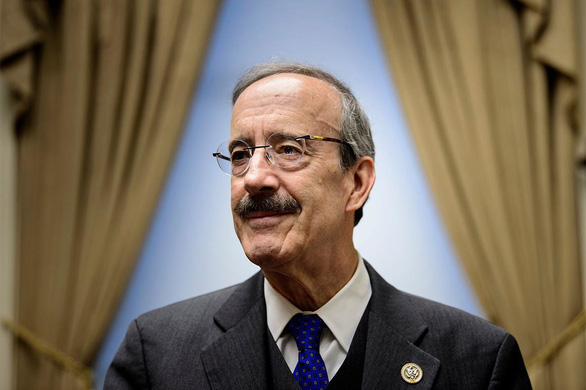 The Chinese survey ship Haiyang Dizhi 8 and its escorts have, since July 3, blatantly disrupted and interfered with Vietnam’s economic activities through illegal moves in the waters inside Vietnam’s Exclusive Economic Zone (EEZ) and Continental Shelf near the Tu Chinh – Vung May (Vanguard Bank – Rifleman Bank) region in the East Vietnam Sea.

“Under the United Nations Convention on the Law of the Sea, China’s actions constitute a violation of Vietnamese sovereignty and its legitimate rights within its [EEZ],” reads the statement posted to Engel’s official government website.

“Just as importantly, China’s behavior threatens the interests of U.S. companies operating in the area,” the statement continued.

Vietnam has contacted the Chinese side many times via different channels, handed over diplomatic notes to protest China’s violations, and demanded China immediately withdraw all vessels from Vietnam’s EEZ, the Vietnamese foreign ministry’s spokesperson Le Thi Thu Hang said in Hanoi on Thursday.

China has “willfully ignored” these repeated requests, Engel said in the statement.

“This kind of harassment is a threat to Vietnam and evidence of China’s willingness to bully its neighbors,” said the U.S. representative from New York.

“Incidents like this demonstrate China’s blatant disregard for international law and diplomacy,” he added.

“I stand with Vietnam and our regional partners in condemning this aggression” Rep. Engel stressed, adding that the international community must continue to uphold the rules-based order and international law.

“I call on China to immediately withdraw any and all ships from the territorial waters of its neighbors, and to put an end to these illegal bullying tactics,” Engel said in the statement.

The House Foreign Affairs Committee is a standing committee of the U.S. House of Representatives that has jurisdiction over bills and investigations related to the foreign affairs of the U.S.

Engel has served as the committee’s chairman since January 2019.