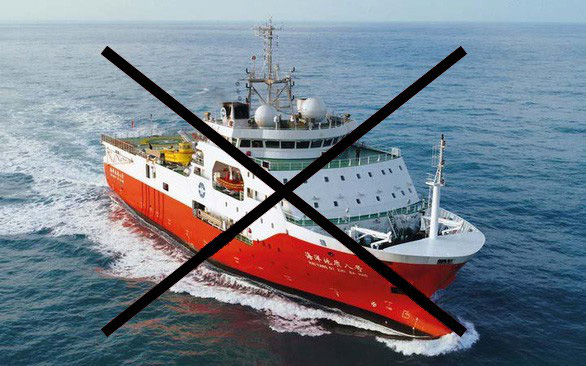 “According to Vietnamese authorities, the group of ships has expanded their operation range within Vietnam’s EEZ and Continental Shelf,” Hang told reporters at a regular press briefing in Hanoi.

The ships “seriously violate Vietnam’s sovereignty as defined in the 1982 United Nations Convention on the Law of the Sea,” she added.

The Haiyang Dizhi 8 first entered Vietnam's EEZ in the southern area of the East Vietnam Sea on July 3 and appeared to conduct a seismic survey.

It left the area on August 7 and returned a week later escorted by Chinese coast guard vessels.

The Chinese fleet entered the area for the third time on September 7 and illegally operated there until September 27, according to updates on Twitter by Prof. Ryan Martinson from the U.S. Naval War College.

The Haiyang Dizhi 8 is now surveying a new area in the East Vietnam Sea that still lies within Vietnam’s EEZ, Martinson wrote on Twitter on September 30.

This is the fourth time since July the Chinese ship has violated the waters which Hanoi insists lie “entirely within the sovereignty and jurisdiction of Vietnam.”

Vietnam has “resolutely” opposed these illegal actions by Beijing on multiple occasions since the violation began.

On Thursday, Hang said Vietnam has “communicated with China” on this issue and demanded that China immediately withdraw the group of ships from Vietnamese waters and “not repeat this action."