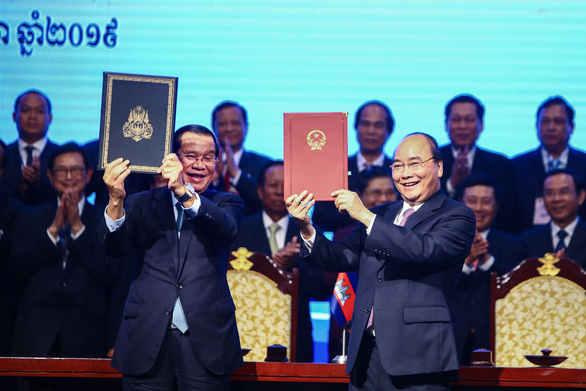 PM Hun Sen and his Vietnamese counterpart Nguyen Xuan Phuc on Saturday presided over the Review Conference on Cambodia-Vietnam Land Boundary Demarcation, held in the Vietnamese capital city of Hanoi.

The historic documents are necessary to achieve 100-percent demarcation of the bilateral borderline.

As of December 2018, 84 percent of the land boundary between Vietnam and Cambodia has been physically demarcated since works began more than 30 years ago.

The Southeast Asian neighbors share a land border of around 1,245 kilometers, starting from the “Indochina fork” - a border marking shared by Vietnam, Laos and Cambodia, to the final point of land boundary between Vietnam’s Kien Giang Province and Cambodia’s Kampot Province.

Speaking at a press conference after the documents’ signing, PM Hun Sen said the border agreements are clear evidence of the hard work that both countries have committed to finding the solution to borderline disputes, Khmer Times reported.

“We must continue to solve the remaining 16 percent of the border which is yet to be demarcated,” Hun Sen was quoted as saying.

“I would like to express my gratitude for the efforts made by both governments who have sacrificed a lot to get this task completed,” the Cambodian PM added.

Hun Sen is in Vietnam for a two-day official visit that began on Friday at the invitation of his Vietnamese counterpart Nguyen Xuan Phuc.

This is PM Hun Sen’s second visit to Vietnam within one year since Cambodia formed its sixth-tenure government in September 2018.

Bilateral trade between the two countries surpassed US$4.7 billion in 2018 and $3 billion in the first eight months of 2019.

Vietnam is among the five largest foreign investors in Cambodia with more than 200 projects worth over $3 billion, mainly in rubber plantation, telecom, finance, banking and energy.