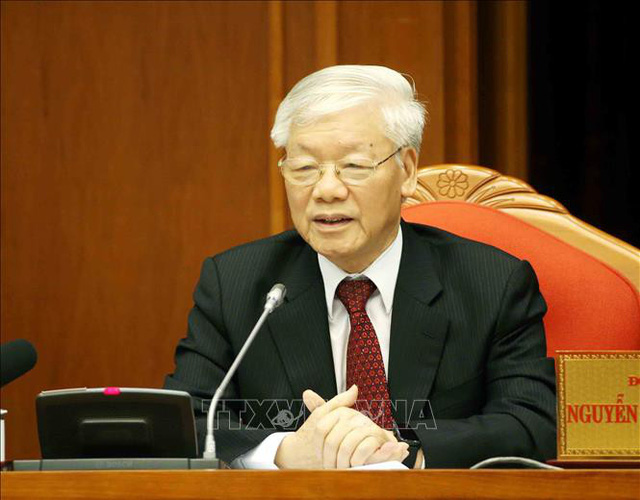 Party General Secretary and State President Nguyen Phu Trong on Monday appealed to compatriots, comrades and soldiers nationwide and overseas Vietnamese to stay united in their will and actions in the fight against the novel coronavirus disease (COVID-19) pandemic.

The leader made the call in the wake of the rapid spread of the disease around the world and its profound and comprehensive impact on every socio-economic aspect in countries, including Vietnam.

He called for the drastic and effective implementation of relevant guidelines by the Party and State, and the management by the Government and the Prime Minister in this regard.

"Each citizen must be a soldier in the battlefield against the disease," he stressed.

The leader recalled the pandemic situation worldwide and added that the disease may develop in a more complicated and unexpected way, thus causing more severe consequences.

Over the recent past, the National Committee for COVID-19 Prevention and Control, the agencies and localities as well as the entire political system have stayed united to take various concerted measures aimed at preventing and containing the spread of the epidemic under the leadership of the Party and the State, and the management of the Government and the Prime Minister, the top leader said.

This was done while ensuring the implementation of the socio-economic development tasks and social welfare and security, he added.

The initial and positive results of the fight are a manifestation of the strength of the national unity and the resolve of the entire Party, people and army in the combat, which have won recognition and praises by the international community, he added.

Trong lauded the involvement of all-level Party committees and organizations and authorities, as well as untiring efforts of the health sector, the army, public security forces, ministries, agencies, the Vietnam Fatherland Front, the business community, and media agencies.

He expressed special thanks to compatriots, comrades and soldiers at home, as well as overseas Vietnamese for their trustful and warm support during the fight.

Vietnam is now at a point in time where there is a rising risk of community transmission, he said, urging the whole political system to give due attention to preventing and containing the pandemic.

"[We] must not panic excessively, but also absolutely must not let our guard down," the leader said.

He emphasized the need to keep a close watch on the situation, forecast the worst scenario, and promptly work out effective measures to contain and prevent the spread of the disease.

Each agency, unit, organization, and locality needs to closely follow the instructions and tighten coordination in the battle, and prioritize putting aside resources, time and efforts for the important work, he requested.

“In the time ahead, we may have to face even greater difficulties that require greater efforts and stronger determination,” he warned.

An active and responsible member of the international community, Vietnam is making all-out efforts, cooperating and coordinating with other countries, especially those hard hit by the pandemic, the leader said.

In the current context, global solidarity and coordination of actions is a firm basis for the world’s ultimate victory against the pandemic, he stressed.

Concluding his letter, he once again called on the entire Vietnamese nation to join hands and stay united to overcome all difficulties and challenges in order to stamp out the epidemic.

COVID-19, a respiratory disease caused by the novel coronavirus that first emerged in the central Chinese city of Wuhan in December 2019, has infected over 784,00 people and killed more than 37,700 globally, according to Ministry of Health statistics.

Vietnam has confirmed 204 infections to date, with 55 having recovered and walked out of the hospital free of the virus.

No deaths attributed to the disease have been reported in the Southeast Asian country.