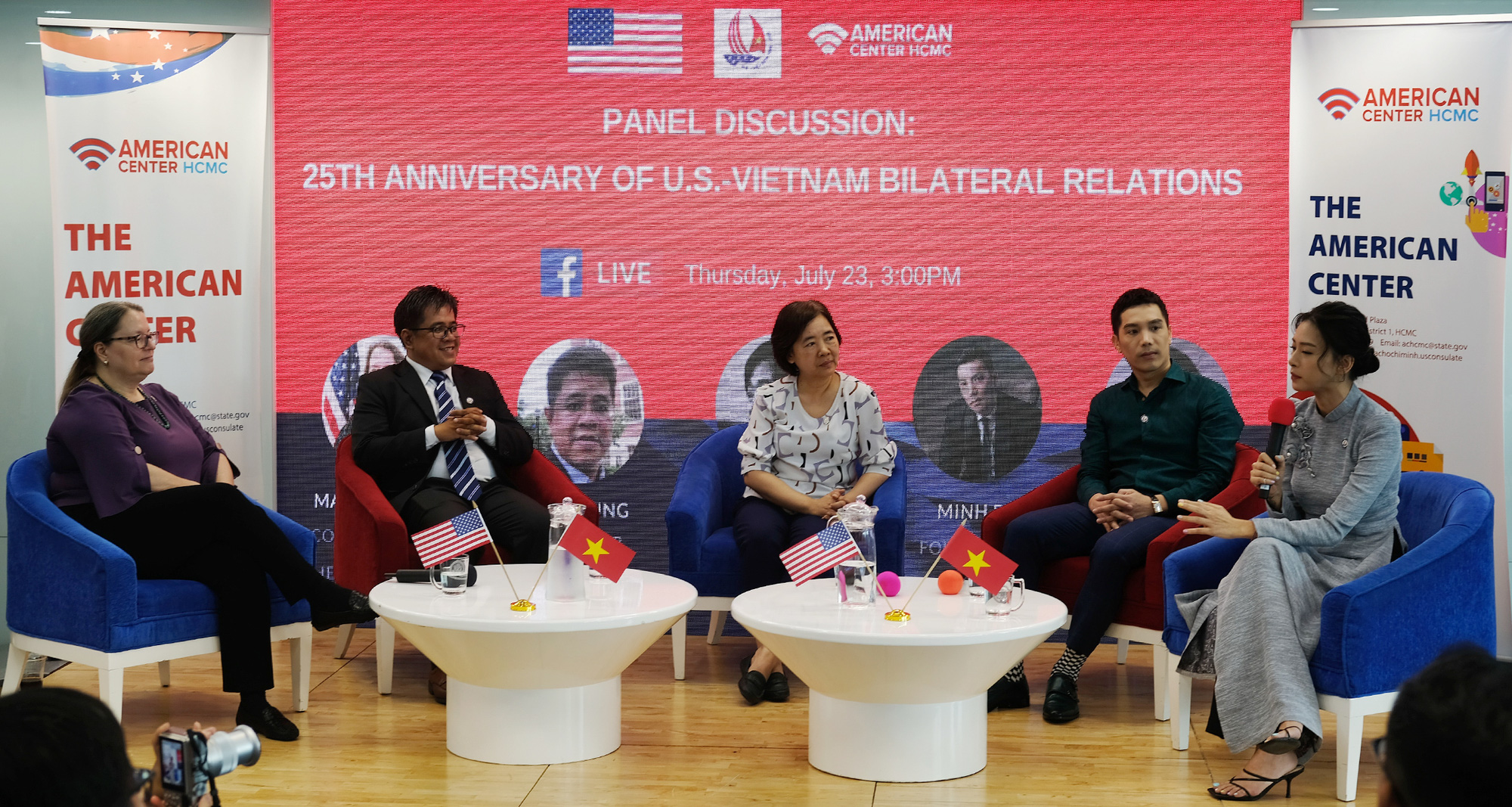 At a panel discussion to celebrate the 25th anniversary of U.S.-Vietnam relations, which was held at the American Center in Ho Chi Minh City last week, panelists remarked on the countries’ decades-long journey from foes to friends across all spheres.

They discussed how far the two countries have come since 1995, when their relations were restored after the war, and what opportunities lie ahead for the next 25 years of continued partnership and friendship.

At the discussion on July 23, the audience was shown a video clip of U.S. President Bill Clinton announcing the formal normalization of diplomatic relations between the United States and Vietnam on July 11, 1995.

Consul General Damour said she witnessed the normalization early in her career when she first joined the U.S. Department of State in 1993.

During her address, the diplomat recounted her first experience with Vietnam in 2002, when she was going through immigration after nearly 30 hours of traveling from Washington D.C. to Vietnam via Tokyo, Japan.

“[There is] this gentleman in his very formal uniform with the hat with a star on it. He looks at my passport. I was born in Kentucky so my passport said Kentucky, U.S. He looks up at me and then looks down at my passport, and then he says, ‘KFC,’” Damour said.

“Yes, yes, I was born in the same place as KFC,” she answered.

After returning to Vietnam at the end of 2019 as the U.S. consul general in Ho Chi Minh City and seeing the changes Vietnam has made, Damour is even more confident about the bilateral relationship.

“I have an absolute firm belief that the relationship between Vietnam and the U.S. 25 years from now is going to be even stronger and more impressive than we've achieved in the last 25 years,” she said.

The U.S. looks at Vietnam as an extraordinarily important partner in the Pacific region and works with Vietnam on issues that are globally significant, she said.

According to the diplomat, through the development process, Vietnam has shown itself to be a stable, prosperous and independent partner in Southeast Asia, contributing to international peace and security and supporting the rule of law in the Pacific region as well as the regulations of the world trading system, which all “contribute to American security.”

“The driving factor was the mutual recognition that it was in the interests of both countries to have a relationship. Both countries really have benefited from the relationship,” Damour said.

“The U.S. has a trusted partner with whom we work in what we call a comprehensive partnership."

There are always challenges and disagreements in any relationship, but the important thing is being honest with each other, she said.

“Honesty, always being there, caring about what your partner cares about and working hard at it, that is how you overcome the differences. We speak daily, clearly about what we care about. We listen carefully to what Vietnam cares about and cooperate in those areas that are important to each other,” she elaborated.

“You have to build the relationship every day. You can’t just come every six months and have a healthy relationship. It has got to be communication back and forward every day,” the consul general emphasized, adding it is very exciting for her to work in Ho Chi Minh City, the largest city in Vietnam and the most entrepreneurial hub that does not hesitate to communicate what it wants.

Talking about the Chinese factor in the relationship between the U.S. and Vietnam, Damour acknowledged that the U.S. has quite a “loud” relationship with China, but Beijing is still a major trading partner of Washington and tens of thousands of Chinese students are studying in America.

At a press conference after the panel discussion, when asked about cooperation in the East Vietnam Sea between Vietnam and the U.S., Damour said that the most important aspect of cooperation between the United States and Vietnam in the sea is both countries’ adherence to the peaceful resolution of disputes, equitable treatment of small and big countries, and a willingness by all countries in the region to abide by international law.

“Vietnam has long been a country that has advocated for the peaceful resolution of these disputes. And that's why I think they make such a good partner for the United States particularly on this issue,” she explained.

Also at the press conference, Dr. Nguyen Thanh Trung noted that in the last few years, there has been a lot of cooperation between Vietnam and the U.S. in terms of maritime domain awareness (MDA) and material support, including the procurement of Vietnam’s first coast guard cutter by the U.S. with a second to be delivered soon.

“I think it's a good starting point for further cooperation between the two countries and for stability in the region,” Dr. Trung said.

He assessed that during the next 25 years, one of the important factors shaping bilateral relations is whether the two sides have strategic trust in each other.

It is the absence of strategic trust that has caused lots of bilateral relations to degrade after a period of development.

“I suppose that the relationship between Vietnam and the U.S. still has room to develop. Currently, the two sides still have a lot of potential to promote cooperation in areas such as defense, security, maritime, energy, education, science and technology, and trade,” he concluded.