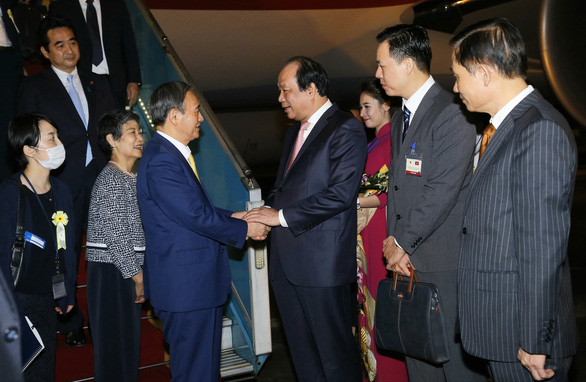 Japanese Prime Minister Yoshihide Suga touched down in Hanoi with his spouse on Sunday to begin his official visit to Vietnam.

This is Suga’s first overseas trip as prime minister after he took over from Shinzo Abe, who resigned in September because of ill health.

Suga’s choice of Vietnam as his first overseas destination is indicative of his appreaciation for Vietnam-Japan relations as well as Hanoi’s role in Tokyo’s foreign policy, according to analysts.

In 2012, Prime Minister Abe also chose to visit Vietnam first after being re-elected.

“This [visit] shows the healthy, strong, and pratical development of the extensive strategic partnership between Vietnam and Japan in many spheres,” Hang remarked.

“We believe that the visit will take place smoothly and spur the growth of the extensive strategic partnership, while contributing to the socio-economic recovery in both countries post-COVID-19.”

Prime Minister Suga is slated to join a meeting with his Vietnamese counterpart Nguyen Xuan Phuc, meet with other Vietnamese leaders, and take part in some sideline activities on Monday.

His official visit will end on Tuesday.