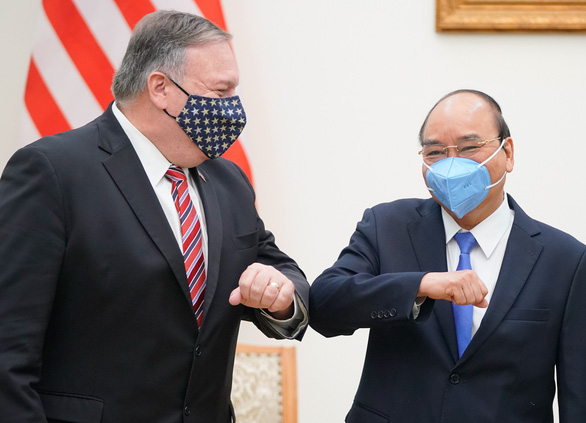 U.S. Secretary of State Mike Pompeo, who was on an official visit to Vietnam on the occasion of the 25th anniversary of bilateral diplomatic ties, affirmed that the U.S. is committed to maintaining stable relations and cooperation with Vietnam during his talks with Vietnam’s Deputy Prime Minister and Foreign Minister Pham Binh Minh in Hanoi on Friday morning.

Vietnam’s Ministry of Foreign Affairs issued a statement about the talks on the afternoon of the same day.

According to the statement, Secretary of State Pompeo stated that the U.S. attaches importance to its comprehensive partnership with Vietnam on the principle of respecting each other’s independence, sovereignty, territorial integrity, and political system, vowing to continue deepening the ties in the time to come.

Pompeo also reaffirmed that the U.S. supports a strong, independent, and prosperous Vietnam that plays an increasingly important role in the region.

At the same time, Washington is committed to maintaining stable relations and will continue to cooperate with Hanoi in promoting the relationship between the two countries so it can make progress in a reliable, effective, and sustainable manner, positively contributing to security, peace, cooperation, and development in the region and in the world.

Deputy Prime Minister and Foreign Minister Pham Binh Minh highly appreciated that the two countries flexibly organized activities to celebrate the 25th anniversary of diplomatic relations in the context of the COVID-19 pandemic.

He took the occasion to thank the U.S. government and Department of State for their practical and timely support in responding to COVID-19, as well as the recent flood situation in Vietnam’s central region, including a US$2 million grant from the U.S. Agency for International Development (USAID).

The deputy prime minister affirmed that Vietnam also attaches great importance to its comprehensive partnership with the United States.

He expressed his joy at the positive and comprehensive development of the bilateral relationship in politics and diplomacy, economy and trade, security and national defense, and people-to-people exchanges.

Regarding economic relations, the Vietnamese official welcomed the effective implementation of the Action Plan toward a harmonious and sustainable trade balance, and at the same time emphasized the potential for developing energy cooperation in their bilateral economic relationship.

Minh affirmed that Vietnam is committed to creating a favorable investment and business environment for American businesses to operate successfully in the long term in Vietnam.

Meanwhile, Pompeo highly appreciated the measures taken by the government of Vietnam toward a harmonious and sustainable trade relationship and the signing of many important trade contracts by enterprises of the two countries recently.

The U.S. diplomat asserted his support for the two sides to continue dialogue and consultation to build stable trade relations.

Later on Friday morning, Vietnam’s Prime Minister Nguyen Xuan Phuc also hosted another reception for Secretary of State Pompeo. The U.S. official wrapped up his visit to the country the same day.