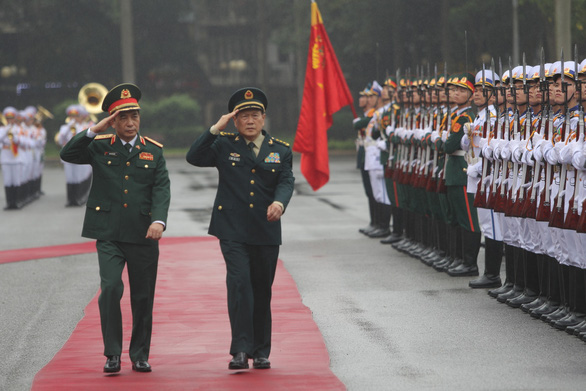 Vietnam’s defense minister said the Vietnamese standpoint is to resolve maritime disputes via peaceful means while well controlling differences in a meeting with his Chinese counterpart in Hanoi on the weekend.

Both engaged in a meeting following the ceremony, with the participation of their entourages, in Hanoi.

Fenghe’s visit exhibited China’s interest in promoting its friendly relationship with Vietnam, for the sake of peace, stability, cooperation, and development, Sen. Lt. Gen. Giang said at the meeting.

Both sides hailed the defense ties between Vietnam and China, with flexible and effective exchanges maintained despite the COVID-19 pandemic.

Vietnam and China should continue implementing the agreements they have signed, especially a joint declaration on the shared vision of their defense ministries for cooperation from now till 2025, the two defense chiefs agreed.

Military dialogue and border exchanges should be on the agenda of cooperation, both said, adding that the two countries need to maintain teleconferences and phone talks when the coronavirus has not been thoroughly controlled.

Sen. Lt. Gen. Giang and his Chinese guest also candidly discussed differences in the relations between Vietnam and China.

Vietnam’s consistent viewpoint is to resolve conflicts by peaceful means on the basis of respect for each other’s proper rights and interests, the Vietnamese defense minister underscored.

International law, the 1982 United Nations Convention on the Law of the Sea, and the Declaration on the Conduct of Parties in the East Vietnam Sea should be the foundation for settling maritime disputes between the two countries, he added.

Both Vietnam and China should control differences over the waterway, avoid complicating the situation, and refrain from threat or use of force, Sen. Lt. Gen. Giang emphasized.