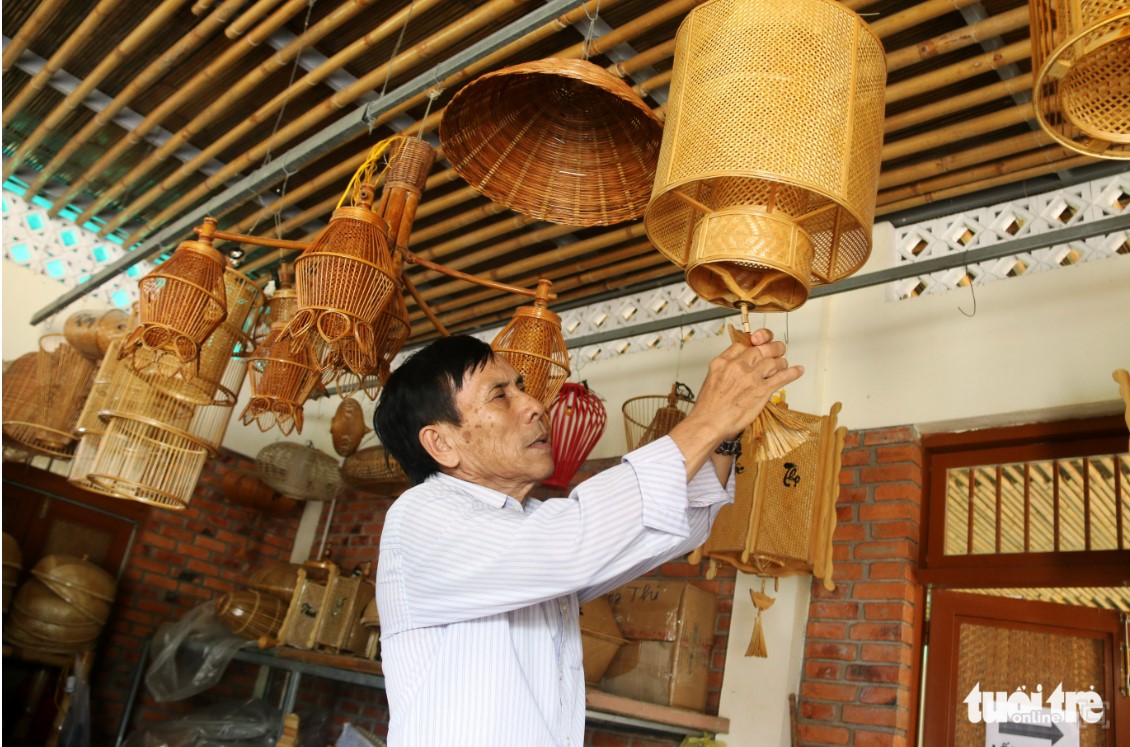 In Hue, the former imperial capital of Vietnam, there is a special traditional artisan village. Despite many difficult obstacles in modern life, the village manages to find a new direction not only to exist but also to thrive remarkably over time.

The Bao La Weaving Collective, which brings together most of the village's bamboo weaving factories, is inundated with orders these days after the COVID-19 pandemic caused difficulties for months.

The 'new face' of Bao La

Vo Van Dinh, director of the collective, pointed to a large yard built with materials and new trees while telling Tuoi Tre (Youth) newspaper about the new plans for the future.

"Our collective has been working for 15 years. Bao La is not only a village where products made of bamboo are woven and sold but also a tourist attraction where we show visitors our talent and learn how to make money," Dinh said.

As a villager, Dinh is enormously proud of Bao La as he tells the story of his village to guests who visit the collective.

The collective's showroom boasts more than 500 models of products made out of bamboo by the talented residents of Bao La Village, Dinh said.

Each of them was created through the restless efforts and creativity of the artisans who do not want their village to be left behind in the rapid changes of modern times.

Few people know how long Bao La Village has existed and how long the traditional craft of bamboo weaving has stood, but estimates are over 600 years old. When Dinh was a boy, there was not a single child who did not know how to split or entwine bamboo.

In wartime, the villagers had to flee from the bombs again and again. They could leave everything behind but they could not leave without a machete.

"All the villagers know how to weave so they can use the machete to cut bamboo to weave baskets and tools for fishing that can be sold to trade for food," Dinh said. "Thanks to the traditional profession, Bao La villagers can live in any place they go."

In peacetime, villagers returned to their hometown and continued their trade to earn a living. But plastic products 'destroyed' Bao La. Many artisans now only weave for their own use instead of selling their handicrafts as they used to.

It was not until 2007 that Dinh and four other villagers thought of rebuilding the artisan village. They took a loan of VND100 million (US$4,267) to establish the Bao La Bamboo Weaving Collective.

"In the first two years after the establishment, our efforts and commitment were in vain as we could not sell any products. Many members then left the collective to find another livelihood," recalled Thai Phi Hung, 72, a craftsman who signed the contract for the VND100 million loan that year.

In 2015, to their surprise, they were able to sell all their products, which were exhibited at an art and craft festival in Hue City. Since then, Bao La products have captured the attention of many customers.

More and more restaurants and hotels have asked artisans to make decorative lamps or bedroom lamps out of bamboo. The skillful artisans nodded when customers made certain requests.

The nods later cost them many sleepless nights as they tried to figure out how to meet the requirements.

When they received the products, the customers were also surprised because their beauty and uniqueness exceeded their expectations.

Then even more orders found their way to Bao La's craftsmen. A Hanoi-based businessman even came to the village to buy up all the existing products for export to China.

In a country with more than a billion people like China, the items from Bao La were received with enthusiasm.

Besides China, handicrafts made of bamboo were also shipped to other demanding markets such as Thailand, Japan, the U.S., and France.

"When it comes to exporting to other countries, we need to be more creative and design different types and models. The more diverse and exquisite our products become, the more competitive we get. Take decorative lamps, for example, of which we have nearly 100 kinds. Our artisans rack their brains to design lamp models that fold well and can be easily transported abroad," Dinh said.

'Selling' a story made of bamboo

At the moment, artisans in Bao La no longer worry about how to sell their products. There are always hundreds of workers splitting bamboo, weaving, and making handicrafts.

The authorities in Thu Thien-Hue have even asked villagers to teach the art of weaving locally and in other provinces.

The transformation of a quiet village into a dynamic and pioneering locale was previously unimaginable to many people.

Thai Phi Hung, an artisan, is considered the brain of Bao La Village. Despite his old age, he has created various models that help other villagers.

Hung said his traditional village has entered the third phase of handicraft.

In the first phase, only things for daily life were woven. In the second, they focused on making normal and simple items while in the third -- the current phase -- souvenirs are made of bamboo to attract tourists.

Hung made a model of a bamboo boat which he says was inspired by a poem by one of Vietnam's most famous poets, To Huu, who wrote about the beauty of Hue. The craft has become a significant symbol of the former Vietnamese capital.

The buyer can both use the boat for decoration and put fruits, cookies, or sweets inside of it.

The COVID-19 pandemic has delayed the village's momentum over the past two years, Hung said, underlining that many more visitors could have visited it without the coronavirus.

If the Bao La artisans want to expand their business activities around bamboo products, they will be supported by the local authorities, who have given the village one hectare of land to enlarge thecollective and receive far more visitors.

The land grant was inspired by the idea of 'selling the bamboo story' of the local people.

The Thua Thien-Hue People's Committee already funded the village to build a traditional house to display its characteristic handicrafts.

"In the post-pandemic period, we have contacted travel agencies and more tourists will come to our village soon," Dinh said. "We will let them see our interlacing flair and this will be the biggest tourism product we have ever made."

Dinh believes that it is no longer time to worry about restoring traditional skills, but to think about how to develop well and leave a legacy for future generations.

"We invited younger people to work in the collective in hopes that they will take over the careers that many people have spent years painstakingly building," Dinh said.

"The younger generations will be responsible for working with partners and travel agencies.

"We old artisans will help them weave and tell visitors about the bamboo history of our village."

The Bao La Weaving Collective has about 100 employees working in person at the facility and another 50 working from home. Members of the collective want to focus only on intertwining, without worrying about selling products as they used to. Nowadays, the concern about selling handicrafts is just a memory told to visitors. Bao La is currently both a tourist attraction and a village that produces handcrafted works of art.