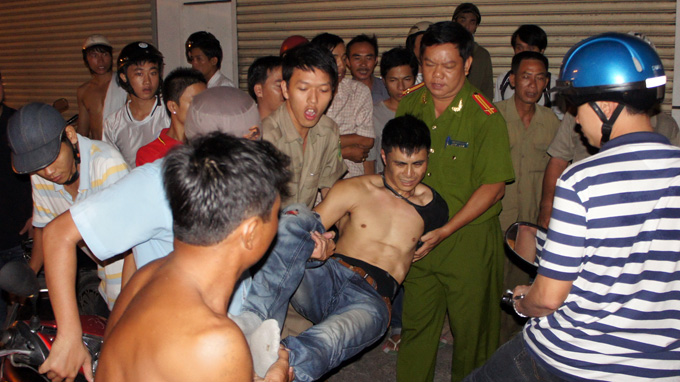 Suspect injured after jumping from police station to flee

A suspect in a physical assault case and the stabbing of a policeman was injured after jumping from the third floor of a police station in northern Ninh Binh City in an attempt to flee on July 3.

According to Ninh Binh police, on the evening of June 30, a patrol team stopped four young men on a motorbike who weren’t wearing safety helmets.

The police later identified Huan as the suspect in the May 24 physical assault of Dinh Xuan Dien, who was hospitalized with a fractured skull.

While in custody, on July 1 Huan admitted to striking Dien on his head with a beer glass and stabbing Ton three times.

At 9am the same day, when the police asked Huan to write a report on his offenses, he asked to have his handcuffs removed to write properly as he was in much pain. When they were removed he sprinted to the door and jumped to the ground from the third floor in front of several witnesses.

He was immediately rushed to the provincial general hospital.

At 1pm the same day, two young males, armed with machetes, stormed into the hospital and physically assaulted the three policemen on duty there.

Several minutes later, around 20 young males rushed into the emergency room, insisting that the police take Huan to a specialized hospital for better treatment.

The mob dispersed as soon as the mobile police force arrived. One hour later, the hospital sent Huan to the Viet – Duc Hospital for an emergency operation.

Huan claimed that he was beaten by the police with rubber and electric clubs mercilessly to intimidate him into admitting to stabbing Ton, and he had no choice but to jump. Huan also claimed that he had nothing to do with the stabbing.

The provincial police confirmed that they had strictly complied with the custody and interrogation procedures and Huan’s jump was only an attempt to get away with his crimes.

Concerned agencies are looking into the case.