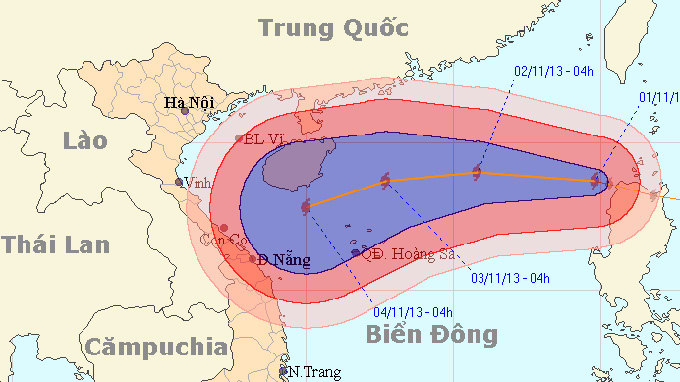 After slashing the Philippines' northern Luzon Island last night, Typhoon Krosa has entered the northern East Sea and is moving west towards Hoang Sa (Paracel) archipelago, the National Hydro-Meteorological Forecasting Center reported. The island has suffered from damaging winds and flooding rain due to the passage of the Typhoon. In Aparri, along the northern coast of Luzon, a peak wind gust was recorded at 107 kph. At 7 am today, November 1, Krosa was centered at 18.9 degrees latitude north and 119.3 degrees longitude east, about 800 km east-northeast of Hoang Sa. Winds near the eye reached up to 133 kph, with gusts of 150-183 kph. The tropical storm is moving west-northwest at a speed of 15-20 kph and at 7 am Saturday, the typhoon will be seen about 440 km east-northeast of Hoang Sa, packing winds of the same strength. Over the ensuing 24 hours, the typhoon will move mainly west at a slower speed of 10-15 kph. At 7 am Sunday, November 3, the storm will be centered around 220 km north of Hoang Sa, with the same strong winds.  Due to the storm, the northeast area of the East Sea will experience rough seas and strong winds of up to 102 kph as of tonight. In areas near the storm’s eye, the winds will be stronger, up to 133 kph, with gusts of over 150-183 kph. Yesterday Defense Minister General Phung Quang Thanh sent urgent messages to military units in Central Vietnam to prepare plans to assist local authorities and other relevant agencies in coping with the typhoon that may affect central provinces in the days to come. He also asked border guard forces in the region from Quang Ninh to Ba Ria-Vung Tau to coordinate with local governments in keeping all boats at sea well informed of the typhoon’s developments so they can take safety measures in time. The same day, the National Committee for Search and Rescue requested that local authorities in the region from Da Nang to Phu Yen, along with the local Steering Board for Flood and Storm Prevention and Control and border guard forces take necessary measures to cope with the storm. All boats must get out of dangerous areas and no boats are allowed to take shelter from the storm in the Hoang Sa Islands area, the Committee said.