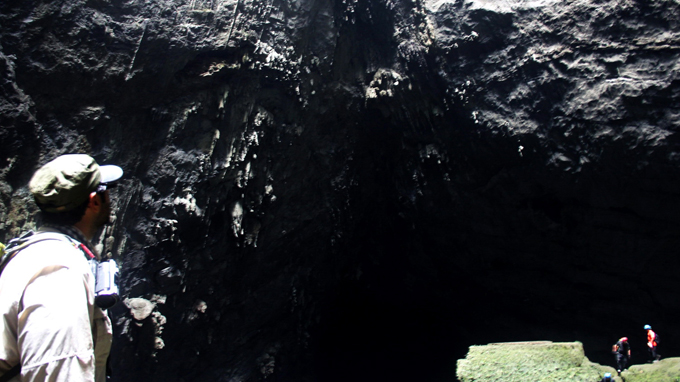 Sheikh Hamad bin Hamdan Al Nahyan, a member of the Abu Dhabi Royal Ruling Family in the United Arab Emirates (UAE), said he is held in awe by the splendor of Son Doong Cave, the world’s largest of its kind, during his visit to Vietnam in early Feb.

According to Oxalis Co., which provides tours to Son Doong in Quang Binh province’s Phong Nha-Ke Bang National Park, the sheikh, his friend and two assistants have just returned safely to Phong Nha after their trip to the cave.

The sheikh and his companions began their trip to the cave on Feb 6 after marveling at the cave’s magnificence from ads on foreign magazines.

He exclaimed that he has yet to see such an imposing, splendid place in the world, which made a strong impression on him and fully satisfied his adventurous pursuits.

The Sheikh added that he will promote the cave on one of his kingdom’s major tourism magazines and expressed hopes that local tourism officials will work hard to preserve Son Doong Cave’s pristine beauty and better tap into its adventure tourism potentials.

He stressed that he will return with his family to Phong Nha soon.

Sheikh Hamad bin Hamdan Al Nahyan, also known affectionately as The Rainbow Sheikh, has retired from his army service and diplomatic life and now devotes most of his time to the development of new vehicles in the world.

Vietnam’s Son Doong Cave, which has a large fast-flowing underground river inside, was found by a local resident named Ho Khanh in 1991.

The cave became public after a group of British scientists from the British Cave Research Association, led by Howard and Deb Limbert, conducted a survey in Phong Nha-Ke Bang, a UNESCO World Heritage Site in Apr 2009.

According to the Limberts, Son Doong Cave is five times larger than the Phong Nha Cave, previously considered the biggest cave in Vietnam. The biggest chamber of Son Doong is more than five kilometers long, 200 meters high, and 150 meters wide.

With such large dimensions, Son Doong overtakes Deer Cave in Malaysia to take the title of the world's largest cave.