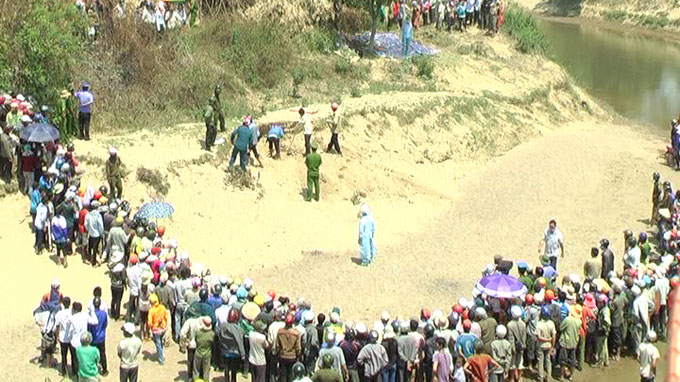 Police are investigating a deadly case in which five students aged 13-19, who were reported unaccounted for on Tuesday, were found dead in sand two days later near a bank of the Krong Bong River in the Central Highlands province of Dak Lak. The deaths were discovered at 6:00 am on Thursday by a child who saw a human arm sticking out from a sand hole along the bank of the river in Krong Bong District. The discovery was reported to local police who immediately rushed to the scene and found five bodies of the teenagers buried deeply in the sand. All the bodies, which had already started decomposing, were removed from the sand then. The police also detected seven slippers and a pair of trousers buried in the sand. The five dead bodies were later identified as members of the H’Mong minority group, namely Ly Se Phong (13 years old), Vang Quang Vinh (17), Mai Van Binh (19), Giang Van Bang (18) and Ly Seo Hung (18). Of these victims, the first two were students at Cu Dram Middle School while the remaining were enrolled at Tran Hung Dao High School in the district. After performing autopsies on the corpses, concerned agencies returned them to their families for burial. The sand hole, which is 13 meters from the bank, was created by floodwater recently, said Y Bri Eban, a local police officer. The police initially assumed that these students could have come to the river for a bath after they finished school on March 11.   Then they might have played together near the sand trap, suddenly sank into it, and got buried to death. Representatives of the provincial People’s Committee and the local Department of Education and Training visited the families of the dead yesterday evening and gave a total of VND7 million (US$189) as initial support to each of them. The Krong Bong District authorities and the provincial Red Cross also offered each family VND2 million and VND1 million, respectively.