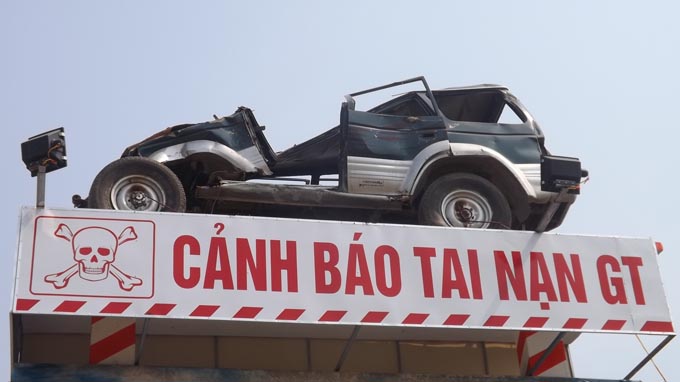 Nguyen Tien Dinh does not quite believe that using signs with text and photos is an effective solution to raise public awareness of traffic safety in Vietnam.

Instead, the businessman who sells construction materials in the central province of Nghe An has come up with an idea to make a like-no-other traffic danger sign in his hometown.

Erected on the roadside of the National Highway No.1A and next to the North-South railways passing the province, the offbeat sign consists of two concrete platforms with a smashed seven-seat car atop. The structure is high enough for people to notice afar.

Below the car wreckage is a hazard symbol featuring a skull and crossbones and a giant message in red that reads “Beware of Traffic Accidents.”

The car was destroyed during an accident in another locality, and Dinh spent VND20 million (roughly US$1,000) buying its wreckage, he told Tuoi Tre.

The businessman, who is director of the mom-and-pop Dinh Nhan Co Ltd based in the province’s capital city of Vinh, then hired builders to make two concrete seven-meter poles to elevate the wreckage.

It cost Dinh a total of VND120 million ($5,660) and took the builders four months to complete the unique traffic sign.

Dinh said he had long wanted to make such a sign after witnessing many fatal road accidents. A real, severely damaged car may create a more dramatic impact on the drivers, he said.

“It seems to me that no one ever notices traffic signs in Vietnam,” he added.

“So my idea is to use a powerful image to warn drivers.