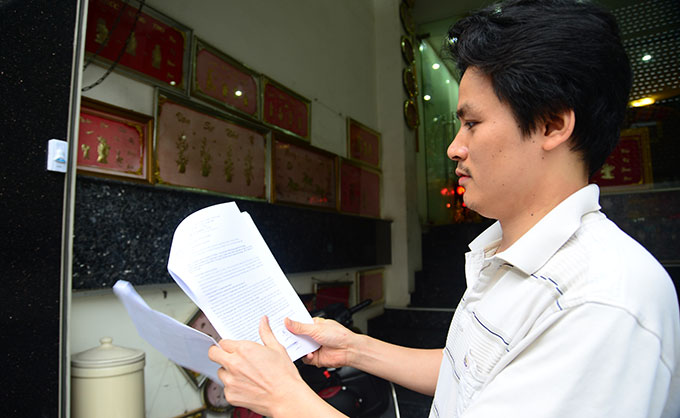 The Ho Chi Minh City People’s Committee has imposed a VND400 million (US$18,827) fine on a man who was allegedly caught exchanging an amount of money only 1/200 of the hefty monetary sanction two months ago.

Duong Cong Kien, hailing from Binh Thanh District, confirmed to Tuoi Tre (Youth) newspaper on Wednesday that he has been informed of the penalty.

Binh Thanh police have ruled that Kien illegally bought $100 from a customer at the Hoang Mai gold shop on April 24, which went against the forex management law.

Police then searched the whole building where Hoang Mai is located, which is also the residence of its director, Nguyen Thi Thanh Mai. Officers eventually sealed 559 taels of gold and confiscated a number of foreign currencies from the facility. (1 tael = 37.5 grams)

Kien, 33, told Tuoi Tre that he has lodged a complaint to the city People’s Committee to protest his fine.

He rejected Binh Thanh police’s accusation that Kien exchanged $100 with the customer on April 24, which is an unknown youth, the man said in his complaint sent to the city’s chairman.

Police were unable to find the $100 banknote, which is the exhibit of the case, despite their searches of his body and the whole building.

Officers finally confiscated a $100 bill inside a safe at the gold shop, but Kien asserted that it was not the exhibit.

Kien also said that there is no footage recorded by the facility’s surveillance camera proving that he made the exchange with the customer.

The man was said to be an employee at the Hoang Mai gold shop in the fine decision, but he claimed he is not.

“I do not have any labor contract or agreement to work for Hoang Mai,” he said.

When police swooped on the gold shop on April 24, Kien was only asked to look after the facility when its owner, Mai, was away, he said, adding that the shop was closed at that time.

Police only made a report on the case on May 19, and Kien said he was not informed of this.

“They said I violated the law on April 24, but why is it that a report on my supposed wrongdoing was made on May 19?” he questioned.

Under current laws, foreign exchange activities are only allowed to take place at facilities licensed by the State Bank of Vietnam.

Individuals or organizations will be subject to fines ranging from VND300 million to VND500 million ($14,120- 23,534) if they conduct foreign exchange activities without a license.