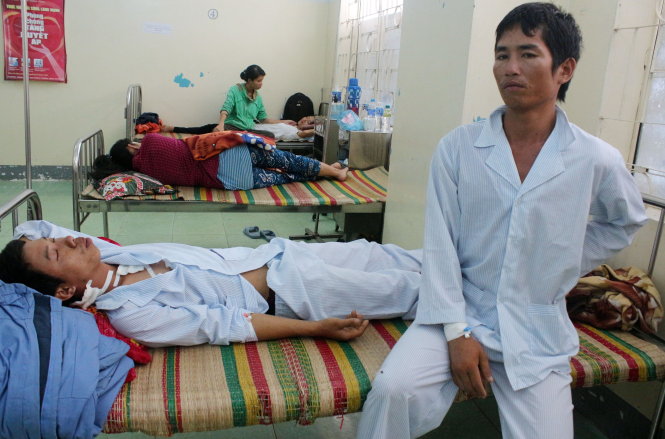 Three workers of a hydropower plant in central Vietnam were struck dead by lightning while they were taking shelter at their workplace from a thunderstorm on Friday evening.

Two others were also badly injured, according to a Vietnamese article published Saturday on the website of Tuoi Tre (Youth) newspaper.

They were workers at Thuong Song Ong Hydropower Plant in Ninh Thuan Province’s Ninh Son District. Two other workers – Le Van Phi, 27, and Nguyen Van Viet, 28 – survived the strike and are being treated at the district’s general hospital for their injuries.

Viet recalled that at the moment of the lightning strike, his group of 12 workers was clearing the site to prepare for concrete to be poured.

When it began to rain torrentially, the man and his colleagues stopped their work and took shelter in a shed nearby.

When the rain let up, Viet and Trong uncovered the canvas and were about to cook their meal.

Without warning, a bolt of lightning struck right at them, knocking Viet down while tossing Trong some five meters away from the shed.

Trong, Hai, and Anh were killed instantly, while Viet and Phi were rushed to hospital.

Phi added that the 12 members of his team all hail from Nghe An Province in central Vietnam.

They were recruited by Thanh Dat Construction Co. based in Ho Chi Minh City, to work at the hydropower project five days earlier.

All of them have financial difficulties, and Trong is survived by his wife and two young children, according to Phi.

Nguyen Van Tuan, representative of the investor of Thuong Song Ong Hydropower Plant, said that his company has offered VND20 million (US$941) to each perished victim.

According to the doctors at the Ninh Son District hospital, the two survivors are making good progress but will possibly sustain after-effects.

Ninh Thuan Province has seen several downpours with gusts and lightning in the past few days.