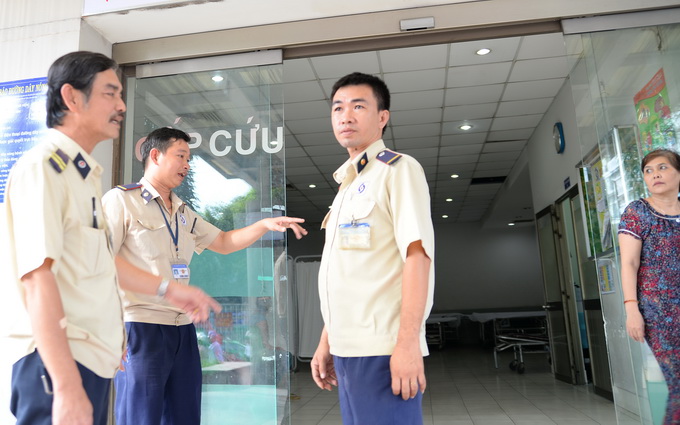 Rapid response teams should be set up in hospitals to prevent increasing waves of violence against health workers, while doctors should improve their medical ethics, a senior health official at the Vietnamese Ministry of Health has suggested.

>> Ho Chi Minh City OK’s construction of 1,000-bed pediatrics hospital with helipad Dr. Nguyen Trong Khoa, deputy director of the ministry’s Medical Examination and Treatment Department, made the suggestion at a seminar on jointly held by the department and Lao Dong (Labor) newspaper in Hanoi on Tuesday to discuss measures to protect heath workers against violence. The suggestion came after statistics delivered at the seminar showed that from last year up to date, 14 assaults against doctors and other health workers by patients’ relatives have occurred in many hospitals across the country. Such assaults happened after the deaths of patients who were childbearing women or who died of other causes during their treatment at hospitals, the department said. In these cases, relatives of the deceased attributed the deaths to malpractice or otherwise faults of doctors and health workers at the hospitals where their relatives had been treated.  The most recent case occurred at the Ninh Binh Obstetrics and Pediatrics Hospital in the northern province of Ninh Binh in late November, when hundreds of people flocked to and besieged the hospital following the death of a 38-year-old pregnant woman. The angry crowds claimed that the death had been caused by the hospital’s faults and requested that the hospital’s management clarify the mortality cause and bear responsibility for it. Local police have been deployed to the hospital to keep security and order and dismiss the crowd. Also in late last month, a similar case happened at the health center in Lien Giang Commune, Dong Hung District, northern Thai Binh province, after a woman died due to a complication during birth giving. In July 2014, relatives of a patient beat doctors and health workers at Hanoi-based Bach Mai Hospital. In Ho Chi Minh City, a man recently brought a knife – used for extracting rubber resin – to the Pediatrics Hospital 2 demanding a clear explanation about the death of his 5-month son, who was said by doctors to have died of a disease that no doctors, both in Vietnam and the world, could cure. “Both the quantity and the seriousness of such attacks are on the rise, worrying and discouraging many doctors and health workers” Khoa said.Improving security, promoting medical ethics Such attacks not only cause injuries to health workers but also interrupt the process of examination and treatment at hospitals, posing danger to patients who are under treatment there, said Dr. Nguyen Van Chi, deputy head of the A9 Department at Bach Mai Hospital. Therefore, hospitals should arrange security guard around the clock. They should also set up and train fast response teams to handle any chaos or security incidents at any time, Dr. Khoa said. Many health officials shared the same opinion that attackers on health workers will be punished for their illegal acts, but doctors and health staffers at hospitals should also make self-criticism. “Cast not the first stone,” Dr. Khoa said. “Reproach yourself first before you reproach others.” First of all, doctors and health workers should improve their medical ethics, which is shown through their contact with patients and patients’ relatives during the process of examination and treatment, Dr. Khoa said. “We are giving treatment and care to patients, not simply dealing with a disease. So we should consider patients the central of our operation, and the safety of patients must be put above all things else.” Professor Tran Quy, director of Bach Mai Hospital, said that medical malpractice and complications during the treatment of patients have led to negative, even extreme, responses from their relatives. Medical malpractice is a global issue, which can occur anywhere and anytime, Prof. Quy said. “The issue here is that we should not hide or cover up doctors’ malpractice, but should set up a mechanism to detect and report such incidents so that they can be handled timely and effectively,” he added.