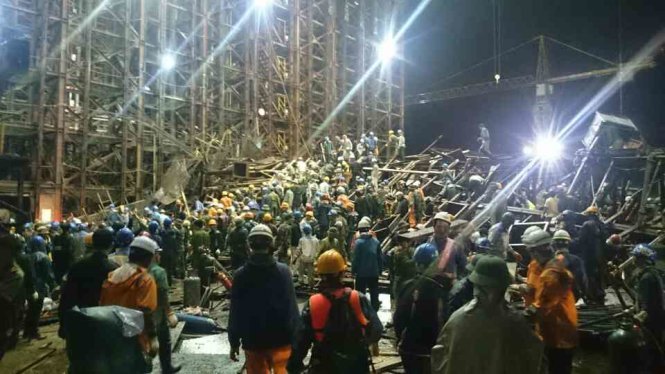 At least 16 killed in scaffolding collapse in Vietnam industrial park

A scaffold collapsed at a construction site in a Taiwanese-invested industrial park in north-central Vietnam on Wednesday evening, leaving at least 16 Vietnamese workers dead and 27 others injured.

>> An audio version of the story is available here The casualties were confirmed on Thursday morning by doctors at the Ky Anh District General Hospital in Ha Tinh Province, where the victims were taken after the accident. Rescuers are working to search for other possible victims under the debris, Tuoi Tre (Youth) newspaper reported. The collapse occurred at 8:00 pm at the construction site of Son Duong Port owned by Samsung C&T Corp, a unit of South Korea's Samsung Group, in theFormosa Industrial Park, which is located in the Vung Ang economic zone.

The Formosa Industrial Park is invested by a Taiwanese company of the same name. At that time, about 50 workers were working on the scaffolding, and all of them fell down, said Hoang Thanh Mai, 40, one of the wounded victims. “My shoulder-blade was injured and I managed to get out of the rubble while many others died on the spot or were stuck under fallen scaffolding parts and could not escape,” Mai said in panic.

One of the injured victims of the accident is being treated at the Ky Anh General Hospital in the north-central province of Ha Tinh. Photo: Tuoi Tre

She added all the victims in the accident are Vietnamese workers who were on their night shift. Another victim, Hoang Huu Thai, 20, whose injuries were more serious than Mai’s, recounted, “The scaffolding collapsed at a height of about 20 meters, and many workers and I fell. I passed out until I was taken to the hospital.” Doctors at the Ky Anh General Hospital have confirmed that 27 injured people were hospitalized, along with the dead, who were taken to the hospital’s morgue. An ambulance driver from the hospital said the actual number of wounded people could be higher as many others who were in critical condition had been taken to the Ha Tinh General Hospital. Eight ambulances and hundreds of police officers, soldiers and rescuers have been dispatched to the scene to rescue the remaining workers.

Rescuers search for the victims under the rubble on the morning of March 26, 2015. Photo: Tuoi Tre