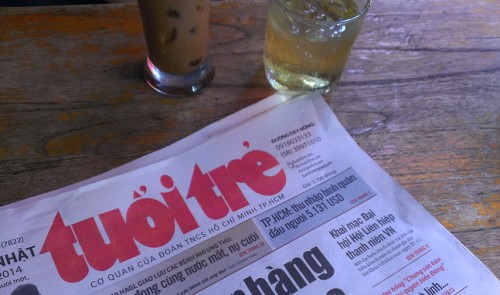 -- Vietnam’s Prime Minister Nguyen Tan Dung and his Lao counterpart Thongsing Thammavong agreed on measures to boost wide-ranging cooperation between the two countries, including bringing bilateral trade to US$2 billion by this year-end, as they met in Hanoi on Friday.

-- A Vietnam-Cambodia joint working group on Thursday made a field inspection in a border area in Vietnam’s southern Long An Province, where a violent incident caused by some Cambodian extremists occurred on June 28, to find the reason behind the incident and discuss measures to prevent the recurrence of similar cases.

-- The Ministry of Justice has proposed that the government abolish the regulation that Vietnamese citizens who want to marry foreigners must undergo an interview at local department of justice, to simplify administrative procedures and save time and cost.

-- Water supply in Rach Gia City and Hon Dat District in the southern province of Kien Giang was resumed on Friday, freeing locals from days of lacking clean water.

-- Nguyen Trung Hau, 31, a Vietnamese-American man, has been arrested for stabbing a 20-year-old Vietnamese man, Nguyen Dang Long, with a knife on Monday after the two quarreled over their traffic collision, police in District 3, Ho Chi Minh City said Friday. The victim was taken to a local hospital for treatment.

-- Foreigners are entitled to buy houses in Vietnam upon their completion of the procedure for entry into Vietnam, Than The Anh, an official at the Housing Development Department under the Ministry of Construction, said at a seminar on the Law on Residential Housing and the Law on Real Estate Business in Ho Chi Minh City on Friday.

-- As of June 30, 2015, the total tax arrears of businesses in Ho Chi Minh City amounted to VND 22,929 billion (over US$1.05 billion), the city Taxation Department reported. Most of the tax debtors are those operating in the construction and real estate sectors.

-- The 5th Haiku Poetry Contest, jointly launched by the Japanese Consulate General in Ho Chi Minh City, the city University of Social Sciences and Humanity, and Van Nghe  (Letters and Arts) newspaper, is open for entries via email at thithohaiku15@gmail.com or by post from now to September 30.

-- The U-18 International Tennis Tournament Junior Circuit – Hung Thinh Cub 2015 will kick off at the Ho Chi Minh City-based Phu Tho Tennis Club on Saturday, drawing 120 players from 22 countries and territories in the world.