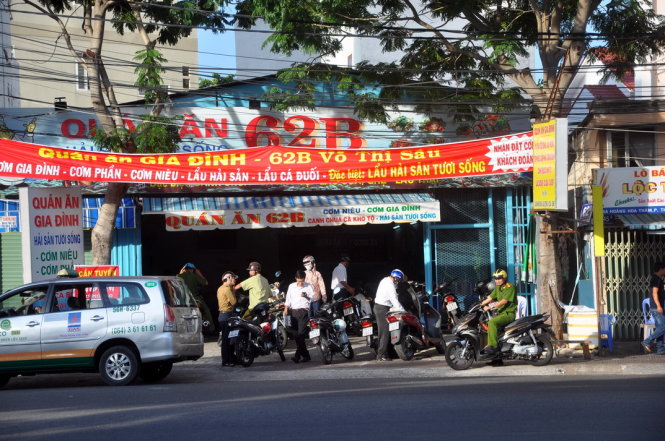 A group of tourists who were ripped off by a seafood restaurant in the southern Vietnamese city of Vung Tau have taken to Facebook to denounce the dishonest eatery, eventually prompting local authorities to take action.

The eatery had its business license temporarily seized and is now facing a VND5 million (US$230) civil fine, officers from the administration of Vung Tau, the coastal city of the southern province of Ba Ria-Vung Tau, said after they inspected the restaurant on Tuesday.

The penalty came more than a fortnight after a denouncement of the restaurant surfaced online.

A tourist, only referred to as NTT, posted a status update on his Facebook page in mid-July, saying his family was charged more than VND5 million for a meal, too expensive compared to normal prices, at an eatery on Vo Thi Sau Street.

The man also attached photos showing his family members quarreling with the eatery attendants, and a picture of the hefty bill.

After the row, the restaurant owner agreed to reduce the bill by 10 percent, while tipping the driver who took the tourists to her establishment VND800,000 ($36.75), according to the Facebook post.

The tourist also complained that he was charged separately for the soup and the prawn in the canh chua tom (sour soup with prawn) dish.

The eatery has been identified as “Quan An Gia Dinh” (Family Eatery), located at 62B Vo Thi Sau Street, which was inspected by a joint team sent by the Vung Tau administration on Tuesday.

The owner, Nguyen Thi Dung, 42, admitted that the meal bill posted online by NTT was hers.

But as the refund was not shown in the bill, officers determined that Dung had made “vague bills that mislead customers.”

The inspection team thus booked the case and seized the business license of the eatery.

Vo Quy Khanh, head of the team, said they would consult the Vung Tau administration to impose a VND5 million fine on the eatery.

“The 62B Vo Thi Sau eatery will be blacklisted,” Truong Thi Huong, deputy chairwoman of the city’s administration, said, while suggesting that the local press “publicize its name and address to warn tourists” against the dishonest restaurant.

Vung Tau is a popular beach destination for tourists as it is not very far from Ho Chi Minh City.

It takes only 90 minutes to travel from the metropolis to Vung Tau via the Ho Chi Minh City-Long Thanh-Dau Giay expressway, instead of two hours and thirty minutes as before.

The city is known for fresh seafood, but is also infamous for ubiquitous scammers and dishonest eateries.