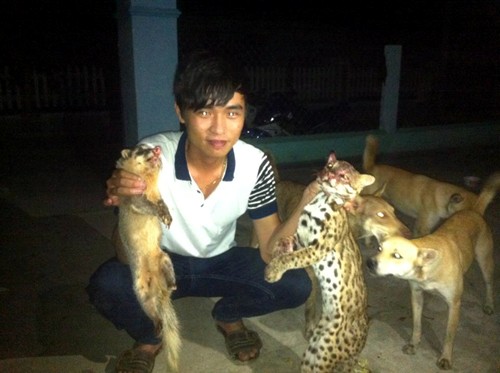 Four local men in the central Vietnamese province of Quang Nam have been fined for boasting their killing of two endangered animals on Facebook, police said.

Police uncovered the case after several photos showing Ly and Truong holding the dead weasels surfaced on their Facebook on September 11.

The horror image sparked anger and protest among viewers, prompting police to look into the case, Huy said.

Officers later identified the men in the photos as Ly and Truong, and summoned them for investigation on September 28.

The two young men told investigators that they were asked to take part in the killing by Hiep and Ro, afer the weasels killed some ducks at their farms.

The four then set up traps at the farms and later seized two weasels and beat them to death, Ly and Truong told police.

The men showed off the killing on Facebook “just for fun,” they told officers.