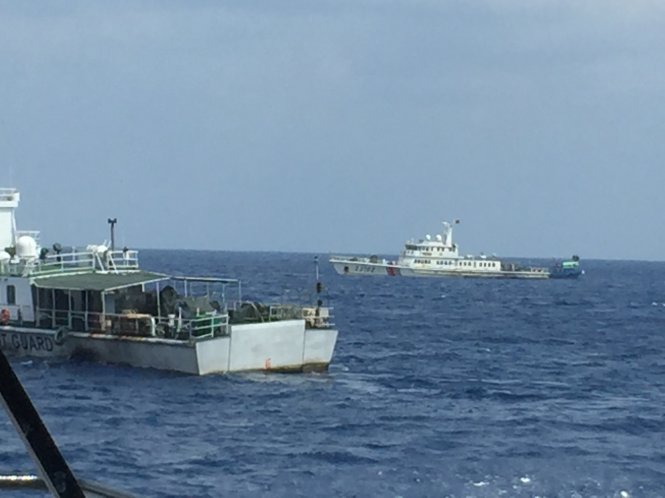 It was not until three hours after Vietnamese competent agencies contacted with Chinese counterparts to resolve the incident that the Chinese ships stopped their prevention, the Vietnam Maritime Search and Rescue Coordination Center (Vietnam MRCC) said on Friday.

At 8:15 am on Tuesday, the Vietnam MRCC received a report from the fishing ship KH 96977 TS, of the south-central Khanh Hoa Province, that the vessel was drifting at sea due to engine breakdown.

The boat, with 11 fishermen on board, was in distress while operating off the Vietnamese archipelago in the East Vietnam Sea, the report said.

The vessel’s owner and captain is Phan Thanh Kim, of the province’s Ninh Hoa District, according to the report.

The Vietnam MRCC of Zone 2, based in the central city of Da Nang, later coordinated with agencies concerned to take measures to help the broken down boat.

At about 7:30 pm on Wednesday, Captain Kim issued an appeal for emergency aid, as food and drinking water on board were about to run out while rescuers had yet to come.

The Vietnam MRCC immediately to send rescue boat SAR 412 to the scene for an emergency rescue mission.

At 11:00 am on Thursday, when the rescue vessel was about 0.5 nautical mile from the scene, two Chinese coast guard ships appeared and prevented it from approaching the boat in distress, the Vietnam MRCC said.

The agency then coordinated with the Vietnamese Fisheries Resource Surveillance Department and the Consular Department under the Vietnamese Ministry of Foreign Affairs to contact with Chinese authorities to resolve the incident.

After three hours of exchanging opinions between the two sides, the two Chinese coast guard ships stopped preventing the rescue boat from giving assistance to the fishing boat, the Vietnam MRCC reported.

The rescue mission began at 2:00 pm and the vessel SAR 412 later towed the broken down boat to Da Nang, the agency said, adding that they arrived at the city at 5:00 pm on Friday.