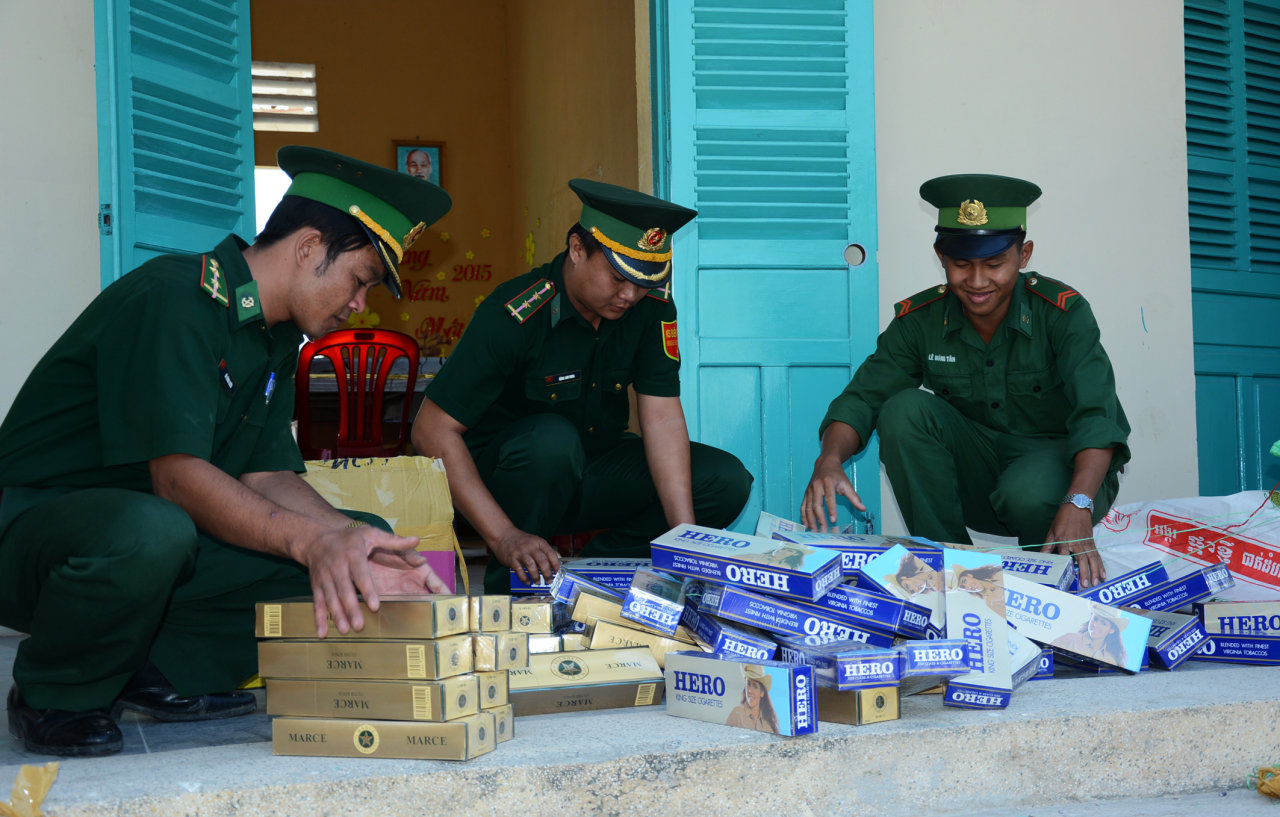 Large volumes of cigarettes are being smuggled from Cambodia to Vietnam as the Lunar New Year (Tet) holiday approaches, despite Vietnamese authorities’ efforts to deter the situation.

Officers in the Mekong Delta province of An Giang have recently busted the largest ever cigarette smuggling operation, confiscating 18,500 packs of tobacco, Colonel Le Quoc Viet, captain of the local border guards, affirmed on Wednesday.

At 9:00 pm on Tuesday, police spotted two speedboats with suspicious signs traveling from Cambodia to Vietnam in the waters off of An Phu District, An Giang. They decided to surround the targets and carry out an inspection.

Four suspects quickly escaped after they noticed the officers, leaving behind their boats loaded with smuggled cigarettes, worth a combined value of VND320 million (US$14,345), according to local police.

The suspects gathered their illegal goods in Takeo Province, Cambodia then disguised themselves as fishery product traders to enter Vietnam, officers said.

A recent Tuoi Tre (Youth) newspaper probe showed that Takeo is a hub where smugglers often prepare shipments of cigarettes and other products to be illegally transported to the Vietnamese city of Chau Doc or to An Phu District in An Giang.

“As the Tet holiday is coming, anti-smuggling officers have tightened security in the area. Thus, we can only operate late at night,” a member of the smuggling ring said.

Tet falls on February 8, with shopping, festive preparations, and celebratory activities going on one week before and after that date.

The smuggled goods are carried by small speedboats traveling through several canals to a market at the Tinh Bien International Borger Gate in An Giang, before being distributed throughout Vietnam.

The Tuoi Tre investigative reporters also pointed out that similar smuggling rings operate at border areas in Tan Chau Town, An Giang, and the neighboring provinces of Dong Thap and Kien Giang.

An increasing volume of cigarettes is being smuggled into Vietnam from Cambodia by sea instead of by land like in the past, said Major Su Van Thong, vice captain of the border guards at the Ha Tien International Border Gate in Kien Giang.

“It is easier to smuggle larger packages and avoid police officers or escape if detected when traveling by sea,” Major Thong explained.

Meanwhile in the southern provinces of Long An and Tay Ninh, contraband cigarettes undergo several phases of transportation before being distributed in Ho Chi Minh City.

It is common for local people to spot men carrying smuggled tobacco and driving their motorcycles at high speed on several streets in the area, according to Luong Xuan Tai, a former smuggling ring member.

Whenthe Tuoi Tre correspondents attempted to approach the smugglers’ usual workplace, the group was on high alert and quickly cleared from the scene.

“If you don’t look familiar, they will notice and swiftly flee the area. The smugglers have eyes and ears everywhere,” Tai stated.

Police officers have faced many difficulties in their efforts to break up these rackets.

The officers are constantly being watched by members of the smuggling rings, said Captain Le Trong Tinh, vice chief of the border guards in My Quy Tay, Long An.