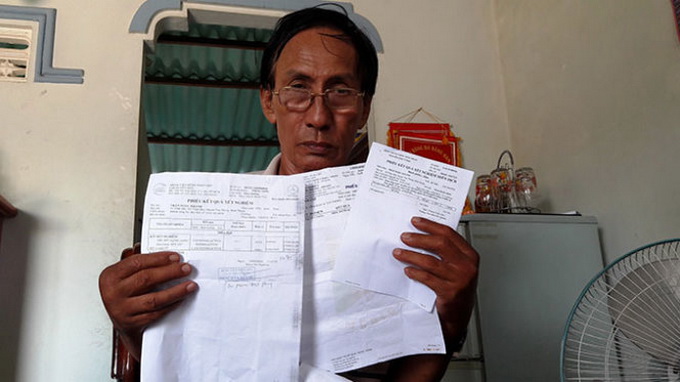 A man in the south-central province of Binh Thuan was surprised to find himself alive and kicking 19 years after being diagnosed with HIV, so he retook the test to prove himself negative.

Tran Ngoc Khanh, 65, tested HIV-positive in 1997, when his province ran a program to screen residents at high risk of being infected with the virus.

HIV infection is the Human Immunodeficiency Virus, which weakens people’s defense systems against infections, the most advanced stage of which is Acquired Immunodeficiency Syndrome (AIDS) defined by the development of certain cancers, infections, or other severe clinical manifestations, according to the World Health Organization (WHO).

Khanh said medical workers of Binh Thuan Province and Vinh Hao Commune, where he lived, had come to his door in July 1997 and asked for a blood sample for the test, which he assumed was due to his history of drug addiction.

When the results returned positive, Khanh said he experienced a mental breakdown and could not eat for days.

“Back in those days, AIDS was frowned upon by the community and viewed as something extremely terrible. People began looking at me differently,” Khanh recalled.

Khanh said his family stopped eating at the same table as him since they knew about his condition, while his children also avoided using the only bathroom in the house.

“I didn’t dare to get intimate with him anymore after hearing about the news, as it makes me cringe whenever I think about HIV,” Khanh’s wife Le Thi Anh said.

“He denied having been engaged in any other relationship when I raised the question. They say HIV patients get worn down very quickly, but he has looked healthy all along,” Anh recalled.

Khanh’s firstborn said he had experienced distress, shame, and an inferiority complex after hearing about his father’s condition.

“Nobody said a word though we were all heavyhearted. We had to refrain from doing activities together to protect each other,” his son confessed.

Once every month, a medical worker would visit Khanh to check on his ‘medical condition’, even advising him to take medications to treat his ‘illness’, which Khanh refused, saying he felt completely healthy.

“They would ask me every time whether I was experiencing diarrhea or any other symptom, but my answer was always no,” Khanh recalled.

His neighbors did not believe Khanh’s words, however, as he said they had told each other about how “HIV and AIDS kill people slowly, not immediately” to explain Khanh’s good health.

“My husband and I were too busy making ends meet to think about retaking the test,” Anh said. “Our business was also affected, since customers were reluctant to come near an HIV patient.”

Khanh had worked as a postman and run a small grocery store at home before opening a lottery agency following the diagnosis, but business has been tough.

“Nobody wants to touch the dish that I have had my chopsticks on at parties. Some blamed me for hiding my illness all along. I have been living in shame for all those years,” Khanh confessed.

On a sleepless night last month, Khanh could not wrap his head around how he had been able to survive for 19 years in perfectly good health with HIV, and finally decided to catch the first bus to Ho Chi Minh City the next morning to settle the disturbance once and for all.

Three separate lab tests at three different major hospitals in Ho Chi Minh City in four days from May 16 to 19 all indicated that Khanh was HIV-negative, which came as a huge relief for the man, who described his feeling at the time as if he had just escaped the ‘death penalty’ and had been reborn to a whole new life.

Khanh then came to the HIV/AIDS Prevention Center of Binh Thuan Province, where he had been tested HIV-positive 19 years ago, and asked to be retested.

“If the center had falsely tested me with HIV infection, then it’s their responsibility to correct their mistake,” Khanh explained his decision.

Test results at the center were returned on Monday, which also indicated that Khanh was negative.

Nguyen Thi Thanh Loan, acting head of the Medical Clinic of Vinh Hao Commune, said she had instructed Khanh to inform the district medical clinic and the provincial HIV Prevention Center to remove his name from the list of HIV patients under monitor.

“Khanh has been under our supervision for a long time, and has appeared to be in good health” Loan said. “It is still not clear whether the positive result was a mistake or that he was cured by taking medication.”

Speaking with Tuoi Tre (Youth) newspaper, Director of the Binh Thuan Province Health Department Nguyen Quoc Viet said that if new test results show that Khanh is indeed negative with HIV, then relevant authorities must announce the news publicly in his neighborhood.

According to lawyer Phan Minh, a member of the Ho Chi Minh City Bar Association, Khanh can file a lawsuit demanding compensation for the false test result.

“In the case of Tran Ngoc Khanh, after determining that the test result was false, authorities must announce the news in public in his neighborhood, apologize, and compensate him for the spiritual and material loss that he has suffered. In addition, Khanh can file a lawsuit demanding compensation for the 19 years of mental damage that he has suffered due to the mistake,” Minh explained.

Meanwhile, Director of the HIV/AIDS Prevention Center of Binh Thuan Province Pham Thanh Thanh said there were cases when the body of an HIV patient had cured itself of the disease thanks to improved immunity, which he said was extremely rare and was still inexplicable.

Some patients, Thanh said, had a mutated gene that could fight off causative agents of a number of different diseases, including HIV-related ones.

Commenting on the probability of a test returning false results, Thanh said each test sample had to go through a protocol dictated by the health ministry, so the chance of a mistake occurring is extremely small.

Earlier this year, a man in north-central Vietnam filed a case demanding over VND773 million (US$35,000) in compensation from a local medical center for mistakenly diagnosing him with HIV over ten years ago.