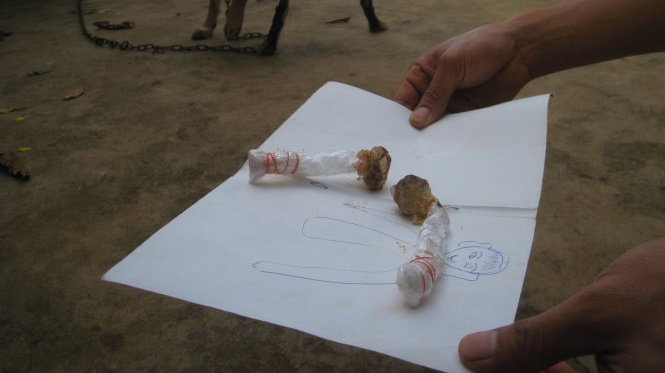 A 53-year-old man in Vietnam’s Central Highlands has died after biting into a stick of dog poison believing it to be a lollipop.

On Sunday morning, Thanh noticed two lollipop-looking sticks lying on the ground while he was sweeping the front yard, according to Thanh’s younger brother Pham Duy Do.

Do was visiting his borther at the time with his six-year-old grandson Nguyen Kim Phat.

The victim reportedly gave one of the ‘lollipops’ to his nephew Phat, telling him to eat it.

“I was standing right there, but I didn’t suspect it to be dog poison since I had never seen it before,” Do recalled.

“If I had known it was dog poison, I would have told my brother to throw it away.”

Instead Do told his grandson not to eat the 'lollipop' as it was not good for the boy’s teeth.

In Vietnam, dog poison is often left behind by dog thieves in order to kill household dogs before they are stolen for meat.

Do then left his grandson for Thanh to look after before running some errands, only to arrive home later to the sight of his brother on the ground foaming at the mouth and convulsing uncontrollably.

One of the ‘lollipops’ was laying next to the victim, with a visible bite taken out of it.

According to local police chief Le Van Lich, the objects Thanh found in his front yard and then ate were indeed dog poison.

Lich said the police had confiscated similar-looking items from dog thieves in the past, with sightings reported by locals of the poisonous sticks in their yards.

Thanh’s alcoholism could have easily affected his ability to think clearly before eating the poison, Lich said.

The victim’s family has declined a police autopsy, claiming that the cause of death was already apparent, the police chief added.

In November 2014, a two-year-old in the same district was also killed after eating dog poison, believing it to be a lollipop.