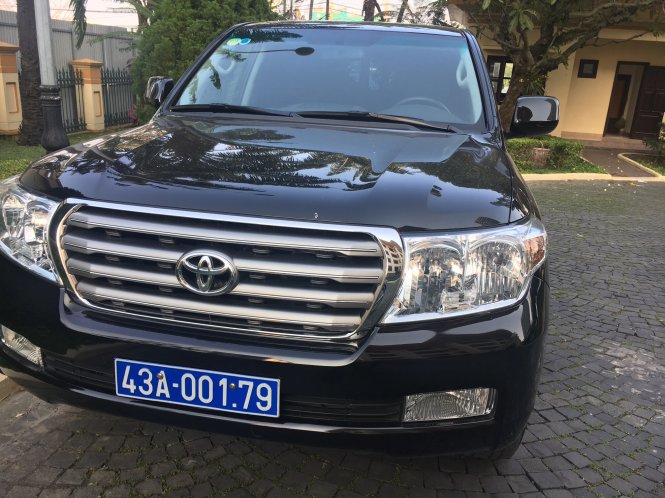 Authorities from one Vietnamese city and another province have addressed public concerns over luxury cars gifted to the local governments by local businesses, saying the practice is by no means a legal or ethical issue.

State entities in the central city of Da Nang and the southernmost province of Ca Mau have attracted public attention following reports from local media outlets that a number of state-owned cars at their disposal were presents from the local business community.

The Ca Mau administration has two luxury Lexus in its state-owned car fleet, whereas the Da Nang Party Committee and the municipal administration each have four cars gifted by businesses.

Both localities have voiced their defense of accepting those controversial presents.

‘We have done nothing wrong’

In an urgent report submitted to the government on Thursday, Ca Mau chairman Nguyen Tien Hai said the two Lexus’s were gifted to the province’s administration by Cong Ly Co., a local private company.

The chairman explained in the report that the cars had been given to the Ca Mau administration when the province was hit by a severe drought.

“Cong Ly Co. stated clearly that their donated cars should be used by the provincial administration on examination and work trips to drought-hit areas,” the report said.

“The recipient of the vehicles is the provincial administration, rather than any specific individual.”

Speaking with Tuoi Tre (Youth) newspaper, Hai reiterated that the Lexus’s will remain under state ownership and will never be used for purposes other than those desired by the donor.

“We have done nothing wrong so there is no reason to cave under public pressure and return the cars,” Hai concluded.

In the meantime, To Hoai Dan, general director of Cong Ly Co., said he was simply taking cues from other Da Nang business before he chose the luxury cars as a gift option.

“I learned that in Da Nang, businesses have gifted several cars to state entities without any problem,” Dan told Tuoi Tre.

“I was placing an order for a Lexus at that time and the idea to use them as a gift to provincial authorities just flashed through mind.”

Dan has good reason to use Da Nang businesses as a reference for appropriate gifts.

Da Nang authorities have made no secret that there are as many as eight state-owned cars under their management that were not bought under state procurement programs, but instead were ‘gifted’ by local businesses.

The cars have been equally allocated to the city’s Party Committee and administration.

“These gifts were given to the Party Committee years ago, under the leadership of the previous Party chief,” Dao Tan Bang, chief of the secretariat with the committee, said.

The Da Nang Party Committee keeps one of the four cars to serve Party chief Nguyen Xuan Anh and uses the other three for the city’s lawmakers’ office, the municipal People’s Council, and the Party Committee Office, Bang elaborated.

“Personally I believe that those gifts from businesses have helped reduce the costs of state car procurements,” Bang added.

With license plates in Vietnam randomly selected on a computer system, the ‘lucky number’ of the Party chief’s car has also caused public scorn.

However, Bang asserted that the license plate has “undergone the random number selection as per the law like any other vehicles.”

Asked about the motive behind the costly gift, Phan Minh Cuong, a Minh Hung Phat representative, told Tuoi Tre that “as a company operating in Da Nang, we feel the responsibility to contribute to the city’s development.”

“Some might say we are trying to ‘buy’ the city’s leaders, but the car is now considered a public asset, rather than the personal property of any specific official,” he said.

“There are no dark motives behind our present.”

On Thursday, a representative of the Da Nang administration also confirmed that they are using four business-gifted cars, but only for public purposes such as “taking leaders on working trips to flood-stricken or mountainous areas.”

The official, however, said it “takes some time to review records and papers” to identify each donor.