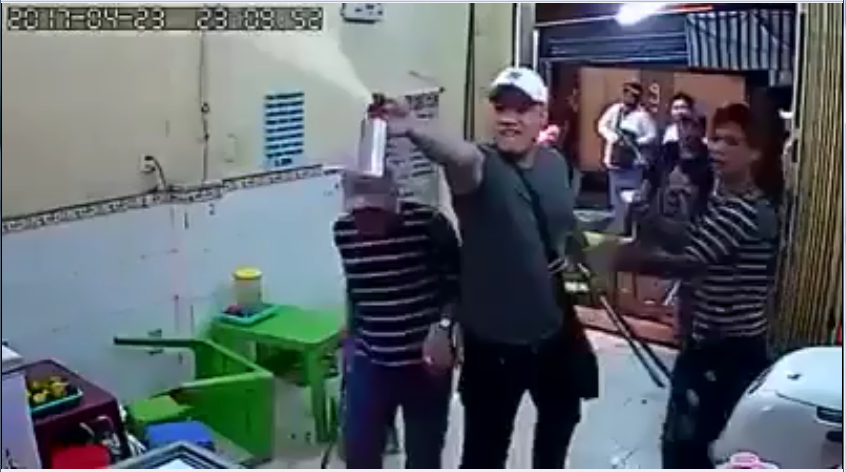 Ho Chi Minh City police have arrested the leader of a gang of at least five members who were seen vandalizing a District 1 ice cream parlor in a video that went viral earlier this week.

Officers said on Tuesday they are still searching for the other members involved in the alleged rival’s sabotage, with the gang purportedly hired by the venue next-door, another ice cream shop.

The vandalism took place on Sunday night, while the store at 2 Truong Han Sieu was closed and attendants were cleaning it.

In the video filmed by the shop’s surveillance camera, a group of gang members, carrying a bag full of swords, along with scimitars and steel tubes storm in.

One member is heard asking the attendants to go to the next-door shop and apologize to its owner, or “you will have no choice but to shut down this parlor.”

Another member of the gang then steps in and sprays tear gas on the attendants, while the others begin breaking tables and other equipment.

The vandalized shop is popular among ice cream lovers in Ho Chi Minh City, and is well known for its flagship product featuring the longan fruit flavor. The next-door location, at 4 Truong Han Sieu, sells the same product but always attracts fewer customers.

Attendants of both venues usually ‘fight’ with each other to lure customers to their respective shops and the long-standing rivalry between the two is known to everyone.

Le Thi Ngoc Quy, 30, owner of the 2 Truong Han Sieu store, said the conflict between her shop and the one next door has become violent several times.

Quy admitted that her husband had once attacked the attendants of the rival shop, but in return, “they had also threatened and assaulted our staff.”

“The other day a gang attacked us and hurt some of our staff,” she said.

Van said there had been cases when “the next-door store’s attendants ‘stole’ my customers after they had already decided to enter my shop.”

Van added that people have automatically associated the Sunday sabotage to the two stores’ rivalry and alleged that she had paid the gang for the vandalism.

“This is not true,” she said. “I hope the police can shed light on it soon.”