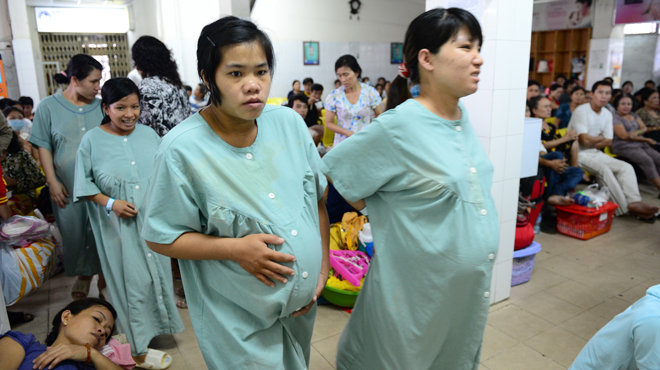 Couples in Ho Chi Minh City are now encouraged to make the most out of Vietnam’s decades-old two-child policy as the city continues to report the lowest fertility rate in the country.

At a meeting of the municipal People’s Council on Tuesday, the local administration reported on the status of the city’s population and proposed relevant population and family planning policies to be implemented until 2020.

According to the report, Ho Chi Minh City performed outstandingly in maintaining sex balance at birth, with 106 boys being born against every 100 girls.

However, the report highlighted the fact that the southern metropolis continued to record the lowest fertility rate out of 63 provinces and cities in Vietnam.

An average woman in Ho Chi Minh City gives birth to 1.46 children in her lifetime, a rate that has been maintained fairly stable over the past nine years, according to the report.

In the 1960s, an average woman in northern Vietnam would give birth to around six children, according to Nguyen Thien Nhan, Party chief of Ho Chi Minh City, who had once worked as head of Vietnam’s National Steering Committee on Population and Family Planning.

Since the 1960s, Vietnam has implemented a two-child policy that emphasizes the goal to have no more than two children in each family, with those working in the public sector facing monetary fines for exceeding the limit.

“The stabilization of Vietnam’s replacement fertility rate over the past ten years has played an important role in keeping families in order, the population sustainable, and creating a golden population structure,” Nhan asserted. “Very few countries in the world have been able to achieve such a feat.”

However, Nhan warned of possible damage to the city’s workforce should the fertility rate of local women plunge too low.

Citing Japan, South Korea and Singapore where low fertility rates that have gone on for decades have led to labor shortage crises, Nhan said the most important goal of any population policy is to maintain a healthy replacement fertility rate, the total fertility rate at which a population exactly replaces itself from one generation to the next, without migration.

After 50 years of keeping its fertility rate at a low level, Japan has had its population decrease by 40 million and the country is now under tremendous pressure from an aged population, Nhan said.

“It is therefore important for Ho Chi Minh City to raise its fertility rate and maintain it at a stable level of two children per woman,” the Party chief stressed. “It brings hardship [to a family] to have too many children, but it brings harm to the country to have too few.”