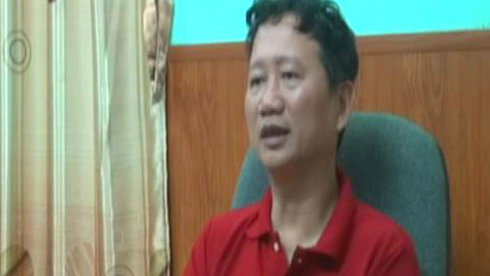 Trinh Xuan Thanh, a notorious ex-oil executive who spent nearly a year in hiding overseas after being charged for criminal mismanagement, appeared on a VTV broadcast on Thursday, confessing that he returned to Vietnam and turned himself over to police by his own volition.

Vietnam’s public security ministry announced on Monday that Thanh turned himself in to the police in Hanoi after evading an international wanted notice issued in September 2016.

Several international news agencies alleged that Thanh was seeking asylum in Berlin, Germany when he was abducted and taken back to Vietnam. The German foreign ministry also released an official statement on Wednesday that the Vietnamese government should return Thanh to Germany where he can submit an asylum application or proper extradition protocols can be followed.

Vietnam’s foreign ministry contradicted its German counterpart’s statement on Thursday when it reiterated that Trinh Xuan Thanh gave himself up to the police.

The 7:00 pm VTV news broadcast later that day marked the first time Thanh was seen by the public since September 2016. He used the air time to confess hiding in Germany because of his “senseless thoughts about the situation.”

Thanh said during his time in Germany, he realized that “[I] have to return and face the truth, meet people, admit my mistakes, and apologize.”

He is among six individuals indicted on charges of “intentionally violating state regulations on economic management that caused severe consequences,” for causing losses worth approximately US$147 million to PVC.

The VTV program also aired a signed ‘confession letter’ written by Thanh admitting to “being so afraid of the investigation into [my] role in PVC’s mismanagement that [I] decided to flee to Germany.”

The ex-official said in the letter that he had been living an unstable life of fear in the European country.

“With encouragement from my family and friends, I decided to return to Vietnam and turn myself over to police in hopes of receiving mercy from the state and the Party,” the letter reads.