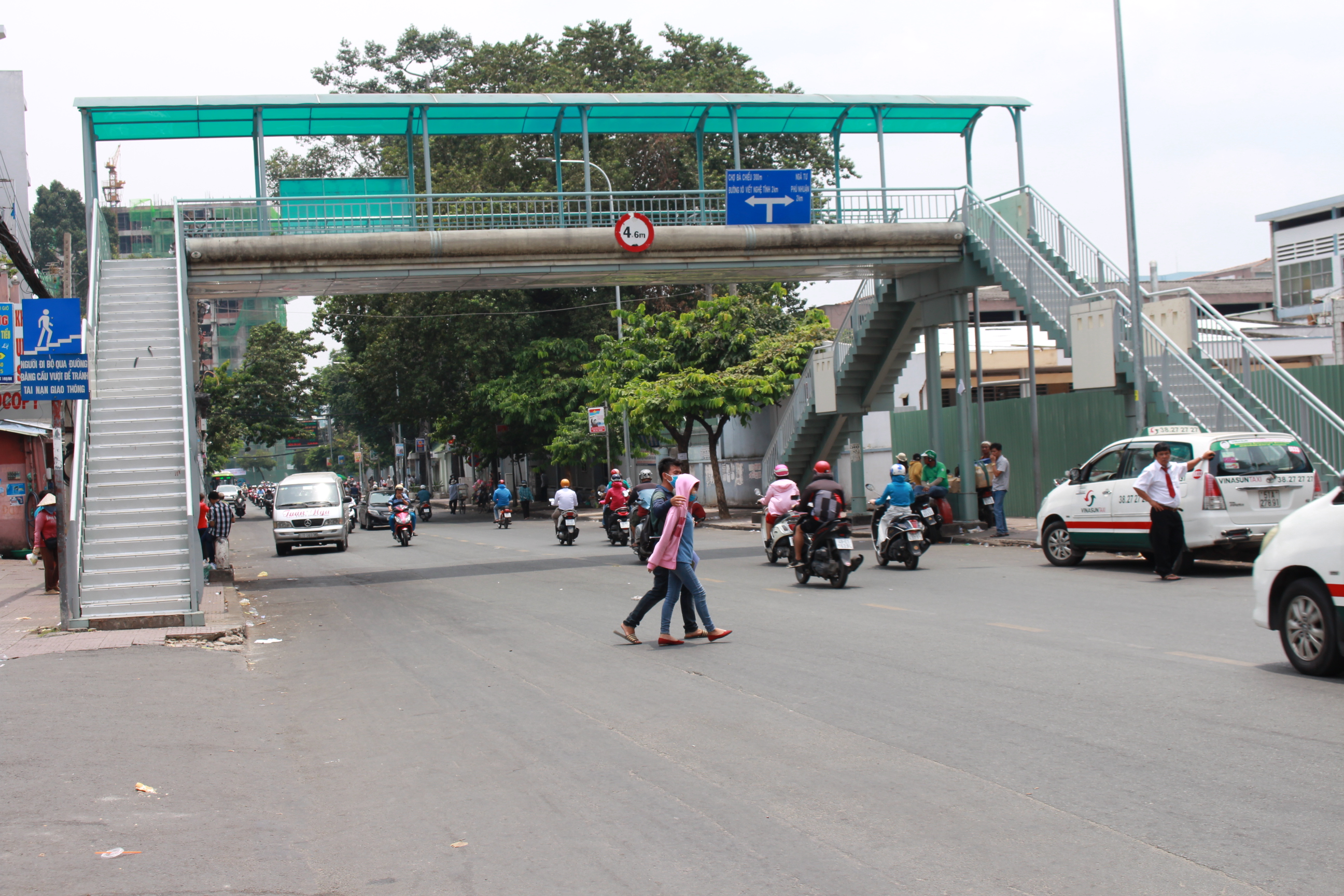 Footbridges are being ignored in Ho Chi Minh City as pedestrians continue to risk their lives by crossing busy streets.

‘Jaywalking,' as the practice is known, contributed to 28 traffic accidents which killed 26 people and injured five others in the southern metropolis during the first nine months of this year, according to statistics from the municipal Traffic Safety Committee.

Local authorities have built more pedestrian overpasses across busy roads to prevent such tragedies, but these efforts are not delivering the anticipated results.

According to observations made by Tuoi Tre (Youth) newspaper reporters at Hutech University in Binh Thanh District on September 20, students frequently jaywalked in order to reach their school, as the building and the bus stop are on opposite sides of the road.

Despite oncoming traffic, many students chose to cross the busy street instead of using a footbridge 300 meters away.

The situation is even more chaotic in front of the Tu Du Hospital on Cong Quynh Street, District 1, where patients and their family members walk on the road instead of using a nearby pedestrian bridge.

A similar scene can also be observed at the Oncology Hospital on No Trang Long Street, Binh Thanh District, where a footbridge is mostly ignored.

In most cases, jaywalkers are to blame for disregarding their own safety and that of others.

However, some people, especially the sick or elderly, do find it difficult to walk up the steps leading to these footbridges.

Nguyen Thi Oanh, a 60-year-old patient of the Oncology Hospital, said she had osteoarthritis in her knee, making it impossible for her to walk up a 10-meter-high pedestrian overpass.

“Walking across the roadway is risky, but I have no other option,” Oanh stated.

To solve the issue, Nguyen Tang Cuong, general director of Quang Trung Industry JSC, said the firm had submitted a proposal to the municipal Department of Transport on the construction of seven modern footbridges under a PPP (public–private partnership) contract.

Under this model, the state budget would fund 70 to 80 percent of the cost, while Quang Trung would take care of the rest.

Under a PPP contract, his company will be in charge of maintaining the bridges.

“It is quite exhausting to walk up a pedestrian bridge, especially for old people, children, and pregnant women,” the general director said.

The seven proposed overpasses will be equipped with escalators, air conditioners, and restrooms.

For Quang Trung industry JSC to get a return on its investment, advertisements will be placed on the structures and some merchandise will be available for sale along the bridges.

According to Vo Khanh Hung, deputy director of the city’s transport department, the suggestion by Quang Trung JSC is being reviewed.

Several issues still require careful consideration, including the high cost and location for each of the footbridges, Hung said.