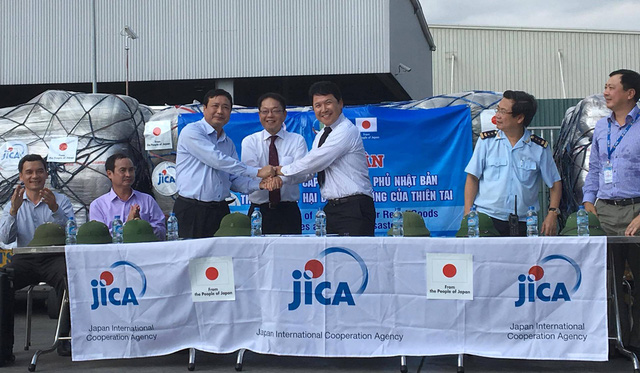 Representatives from the Japanese government on Friday handed over emergency aid to Vietnamese authorities, which will transfer them to people in northern localities raged by destructive flooding last week.

The aid, consisting of 40 sets of canvases, 47 water purifiers, and more than 5,000 blankets, arrived at the Noi Bai International Airport in Hanoi, where the handing-over ceremony was held shortly after.

Fujita Yasuo, chief representative of the Japan International Cooperation Agency in Vietnam, represented the Japanese government to hand over the aid to Tran Quang Hoai, head of the General Department of Natural Disaster Prevention and Control.

The embassy official expressed his empathy to the Vietnamese flood victims and hope that the aid could help them mitigate their difficulties.

Vietnam’s National Steering Committee for Disaster Prevention and Control, is working hard to make sure the donation could reach flood victims in Yen Bai and Hoa Binh, which suffered heavy rains and floods on October 10-13, as soon as possible.

The Japanese government said it a statement that it decided to provide the aid to Vietnam on Thursday, responding to the Vietnamese government’s call and in line with the close relationship between the two countries.

Vietnam’s northern and north-central regions were hit by continuous downpours, which also triggered floods and landslides from October 10 to 13, with more than 2,600 households having to evacuate during the disaster.

As of October 16, the destructive floods have killed 75 people, injured 38 and left 28 others missing, according to the National Steering Committee for Disaster Prevention and Control.