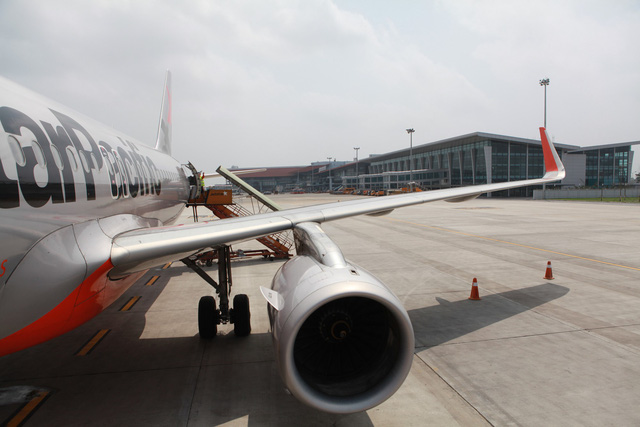 A Jetstar Pacific flight from Hanoi to Ho Chi Minh City was forced to turn around and make an emergency landing at Noi Bai International Airport in Hanoi on Monday morning.

According to passengers on board flight BL785, the plane turned around only 15 minutes after taking off from Noi Bai at around 8:30 am on Monday.

A Jetstar representative confirmed the incident to Tuoi Tre (Youth) newspaper, saying that the pilots received an alert about a possible fault with the plane’s landing gear via the cockpit warning system.

However, maintenance engineers later found that it had been a false alarm, confirming that the plane’s landing gear was functioning normally.

“Our policy is to approach every cockpit alert seriously and to check on every reported error before putting the plane back in operation,” the representative explained.

All passengers aboard flight BL785 were transferred to another flight which departed from Noi Bai for Ho Chi Minh City at 2:55 pm the same day.

The budget carrier paid VND400,000 (US$17.62) in compensation to each passenger, while providing them with a complimentary lunch during their wait.

In related news, a Vietjet flight from Ho Chi Minh City to Vinh City in north-central Nghe An Province had to circle the destination airport multiple times before landing due to poor visibility, said to be caused by fog.

Flight VJ212 had been scheduled to land at 8:00 am on Monday, but low-hanging cloud and heavy fog forced the pilots to delay their landing by one hour while they waited in the sky for better weather, according to a Vietjet representative.

On Sunday evening two other Vietjet flights from Ho Chi Minh City to Vinh – VJ224 and VJ200 – were also forced to make alternate landings at Noi Bai due to unfavorable conditions at the Vinh Airport.

The budget airline arranged a free long-haul bus for the diverted passengers to travel by road from Hanoi to Vinh.

Those who refused to take the bus received compensation of VND200,000 ($8.81) to travel to Vinh privately.