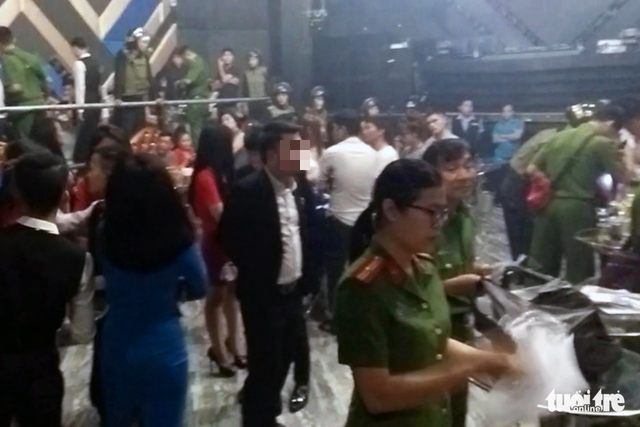 Eighty people have been caught using drugs at a club in the southern Vietnamese province of Dong Nai.

Officers from the local Department of Police raided the H5 Club on Vo Thi Sau Street in the provincial capital city of Bien Hoa on Sunday.

The venue is managed by the Bien Hoa-based Hoang Nam Trading Company.

Two hundred and eighteen customers and employees were inside the venue at the time of the raid, many of whom displayed symptoms of being under the influence of drugs.

Following an on-the-spot examination, officers confiscated two and a half pills worth of ecstasy, another packet of synthetic drugs, one bag of marijuana, and two switchblades, which had been thrown on the floor.

Everyone inside the club was then brought to the local police station for testing, with results showing that 80 people - 69 men and 11 women - were positive for drugs.

Four employees of the club were among those who tested positive.

Eighteen of the drug users were transferred to the local community center for a mandatory rehab program as they were of no fixed address.

The others were fined.

Officers raided the same club on New Year's Eve and discovered that 132 people, including 27 women, were under the influence of stimulants, and were each slapped with administrative fines.