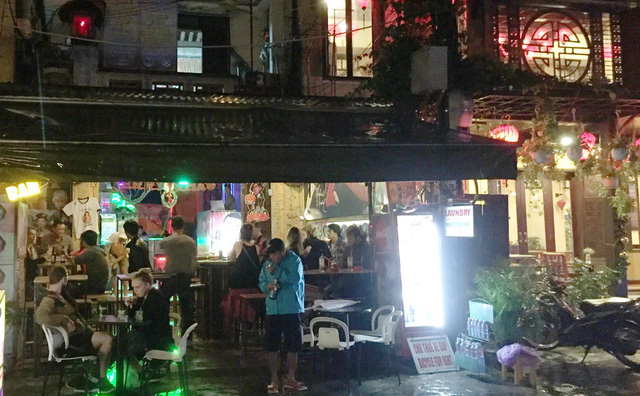 Hoi An authorities will take firmer actions towards removing noisy pubs from its ancient town in an effort to restore tranquility to the popular tourist attraction in central Vietnam, a local official said Friday.

Excessive noise from bars, pubs and diners located inside Hoi An Ancient Town is among the biggest threats to local tourism, alongside tourist scams and dual pricing, Hoi An deputy chairman Nguyen Van Son said at a meeting with those establishments recently found violating  noise regulations.

The ancient townreceives 3.3 million visitors a year on average, a remarkable number that is being threatened by misconducts of business establishments that fail to protect the town’s brand of tourism, Son told 25 bars and diners owners at the meeting.

Le Van Binh, head of Hoi An’s Chamber of Commerce and Tourism, said the local administration had been “considerate” in allowing diners in the ancient town to open and run bars within their establishments without permits.

City authorities have only issued permits for bars at three diners, while there are already 14 bars in operation on a 400-meter section of Hoi An’s Nguyen Phuc Chu Street.

These establishments cannot properly soundproof their bar, as doing so would require alterations to the buildings’ structures, which is not allowed the due to strict construction laws pursuant with UNESCO guidelines in preserving a heritage, Binh explained.

“The city’s administration only turns a blind eye to the existence of your bars due to our need for extra entertainment services for tourists to extend their stay and spend more money,” Binh told the business owners on Friday.

But if excessive noise from the bars is to drive tourists away, they cannot be allowed to exist for any moment longer, he stressed.

Dinh Hoang Cong, a bar owner invited to Friday’s dialogue, attributed the use of loud noise to unhealthy competition among establishments in the ancient town in their fight to attract customers.

Some bars even advertised that they remained open through the night until 5:00 am, despite regulations stipulating that no entertainment services were to operate after midnight, Cong said.

Phan Ngoc Minh Kiet, deputy chairman of Hoi An People’s Council, stressed that authorities must put an immediate end to bars and diners that violate regulations on noise control and opening hours.

“We have been tolerant for long enough. From now on, any establishment that receives even just one complaint from local residents and tourists will be removed from the ancient town,” Kiet said.

“Starting tonight, those who do not comply with regulations on noise limit, do not turn down their volume after 10:00 pm, or remain open after midnight for even only one minute will be forced to close down permanently,” he said.

“There will not be a single exception.”