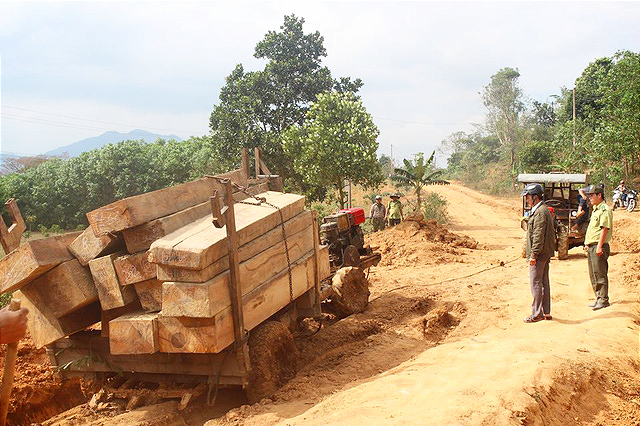 Authorities in the Central Highlands province of Dak Lak are investigating a large-scale illegal logging operation after discovering 114 logs of wood earlier this week.

Colonel Nguyen Quang Trung, the M’Drak District chief of police confirmed on Wednesday that the illicit activities had been discovered in an area of forest managed by the M’Drak Forestry Company.

On Tuesday night, officers raided a crew of outlaw lumberjacks attempting to transport timber from the forest.

Though the suspects managed to escape, they left behind five tractors and 72 wood logs, each measuring approximately three meters long.

Law enforcers expanded their search and were able to uncover 42 additional logs at a site about three kilometers away from their original operation.

The area is currently under surveillance in case the loggers return for their harvested timber. A manhunt is also underway.

“This is a very serious case of illegal logging. We will coordinate with relevant agencies to bring he suspects to justice,” Col. Trung asserted.

Y Sy H’Dok, head of the provincial Department of Forest Protection, told Tuoi Tre (Youth) newspaper that his agency is participating in the investigation.

An examination carried out by H’Dok’s agency showed that the timber had been chopped three to four months prior.