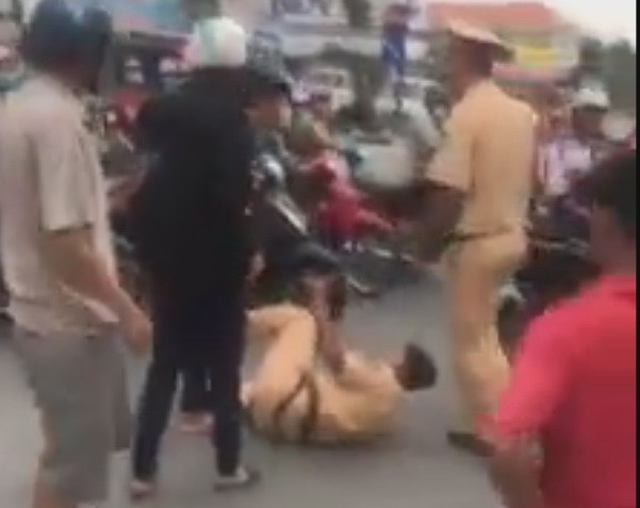 Three brothers have been arrested for violently resisting traffic police officers in Vietnam.

Police in Thuan An Town, Binh Duong Province, confirmed on Thursday the arrest of Nguyen Van An, 31, Nguyen Van Binh, 32, and Nguyen Van Nguyen, 23, all brothers hailing from the north-central province of Thanh Hoa.

According to police records, An and his wife were traveling by motorcycle on My Phuoc-Tan Van Street in An Phu Ward at around 5:30 pm on Wednesday when traffic police approached the couple for stopping in the wrong lane at a traffic light and not wearing helmets.

The man, who appeared to be under the influence of alcohol, refused to cooperate with the officers and instead attempted to crash his motorbike into Lieutenant Huynh Nguyen Minh Chau.

Lt. Chau managed to stop An’s vehicle and asked him to present his driver's license and other relevant documents.

An argument broke out and An violently pushed the officer to the ground.

As Lt. Chau and his comrade tried to escort An back to the local police station for his behavior, Binh and Nguyen arrived at the site to help their brother.

Binh and Nguyen attempted to block the officers in order for An to escape. But An was too busy attacking the officers to flee the scene.

Officers from the An Phu Ward police bureau eventually arrived and apprehended the three brothers.

A witness captured the scene on camera and uploaded the footage to social media.